In this article you will find the Review of the board game Tang Garden where we will guide you through the beautiful landscapes of this game, as well as photos of all the components included in this tile placement game.

Tang Garden is a tile placement game and set collection. Unlike other similar titles such as Carcassonne and Cacao, Tang Garden needs a board on which to develop the games. The players will be placing the adjacent garden tiles one with the other, forming coherent landscapes attending to the three types of terrain that exist: vegetation, water and stone. Likewise, they will have to take charge of decorating the garden (board) with several different elements such as: Temples, Bridges, different species of trees, birds, fishes, lotuses and peonies.

In Tang Garden, the winner is the player who get most coins during the game and during the the final count.

The player who has visited China most recently starts. The turns follow clockwise.

One turn consists of building the garden or placing decoration on a mandatory basis (to choose between one of the two). Then, there is an opportunity to perform each of the following optional actions: Influence a character, Use a lamp, and Reactivate a lamp.

The contest ends when there are only three or fewer landscape tiles left on the board or when one of the four stacks of garden tiles has been depleted. The current round must end so that all players have completed the same number of turns. In addition to all the coins that players have obtained during the game must been added those obtained in the final count.

The first feeling Tang Garden can give when starting to play is to be similar to Carcassonne because the game have tiles that have to been placed, making grounds the same type. Considering this first point, i would say it is not original. What caught my attention is its aesthetics, which is totally impressive at a glance. But once put in the tests, I really liked about new mechanics: place characters on the board to enjoy the decorative elements and landscapes that the players themselves are putting on it. The result is a certain level of strategy that allow you to perform quite powerful combos.

Tang Garden is really replayable, since like all tile games the board is 100% different each time a new game is played. The excitement of the game lies in the competition against other players, when all want the better positions of the board to placie their characters and different elements. When placing garden tiles and landscape tiles, you have to look at the character you currently have to offer him what you want to see with his preferred view, but you also have to be a little attentive to what others have to avoid placing them in their vision what they want to see. You can also be a vulture and wait for the rest to fill the board with various elements and then put your own characters in the most beneficial places. Some competition can also be seen in the temple decoration cards, which work for the majority when it comes to contributing coins.

Tang Garden is nothing complicated to learn to play or to put it into practice. The manual is quite well structured and not excessively long, considering that the last pages explain a solitary game mode. Also indicate that it is full of examples that are very helpful to understand above all how to receive the benefits by putting the garden tiles adjacent to each other. It is true that the subject of the abilities of the characters and their preferred views can generate some difficulty for less seasoned players. Personally, there is a certain point of action to influence a character that was not entirely clear to me when I did the tests and to which I have ended up applying my own logic, since the manual does not specify too much either. All in all, Tang Garden is a medium difficulty game for family audiences. Knowing how to play a Carcassonne or a Cocoa is to go one step further.

Arguably Tang Garden’s greatest strength is its beautiful visuals. The game box itself is already a wonder, although being white will happen as with that of the Tokaido, which will take little time to fill with crap. As the game progresses and the board is filled with garden tiles, shrines, trees, fish … the game is taking color. It may be missing that the fish, birds and peonies were plastic figurines too and not small circular tiles. The quality of the figures of the characters is not exceptional either, since they lack level of detail, being in my opinion somewhat seedy. Another negative point that I think it is necessary to emphasize is that the templates are a bit cluttered when they are placed on the board, since they cover what is behind them and sometimes they will have to be removed. Taken together, Tang Garden is a visual experience, and never better said. I do not put a ten in this section because I really think that the bad details that I mentioned before could have been improved, although this would mean an increase in the final price of the product, as is evident.

All Tang Garden componentes on our board game mat: 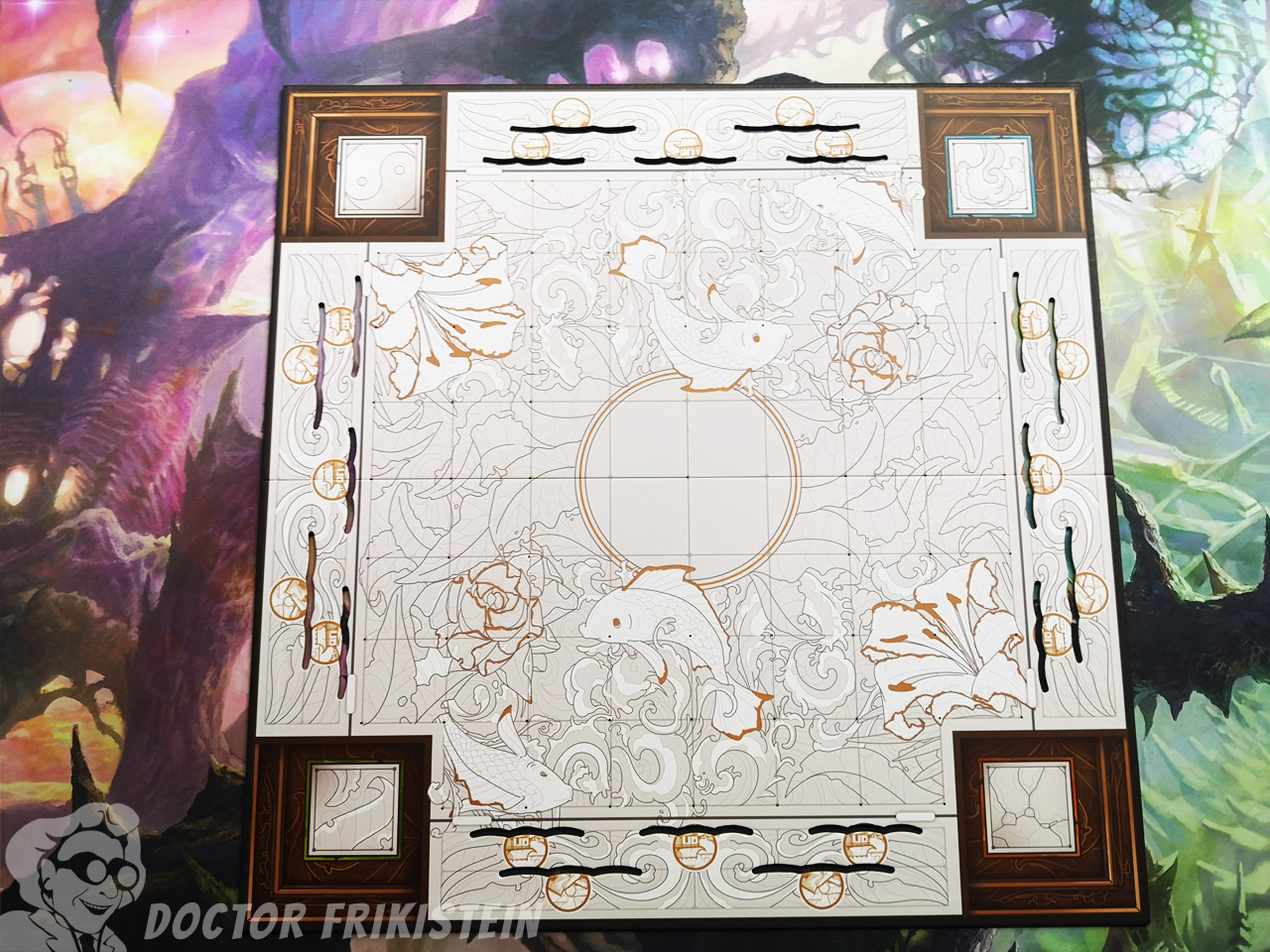 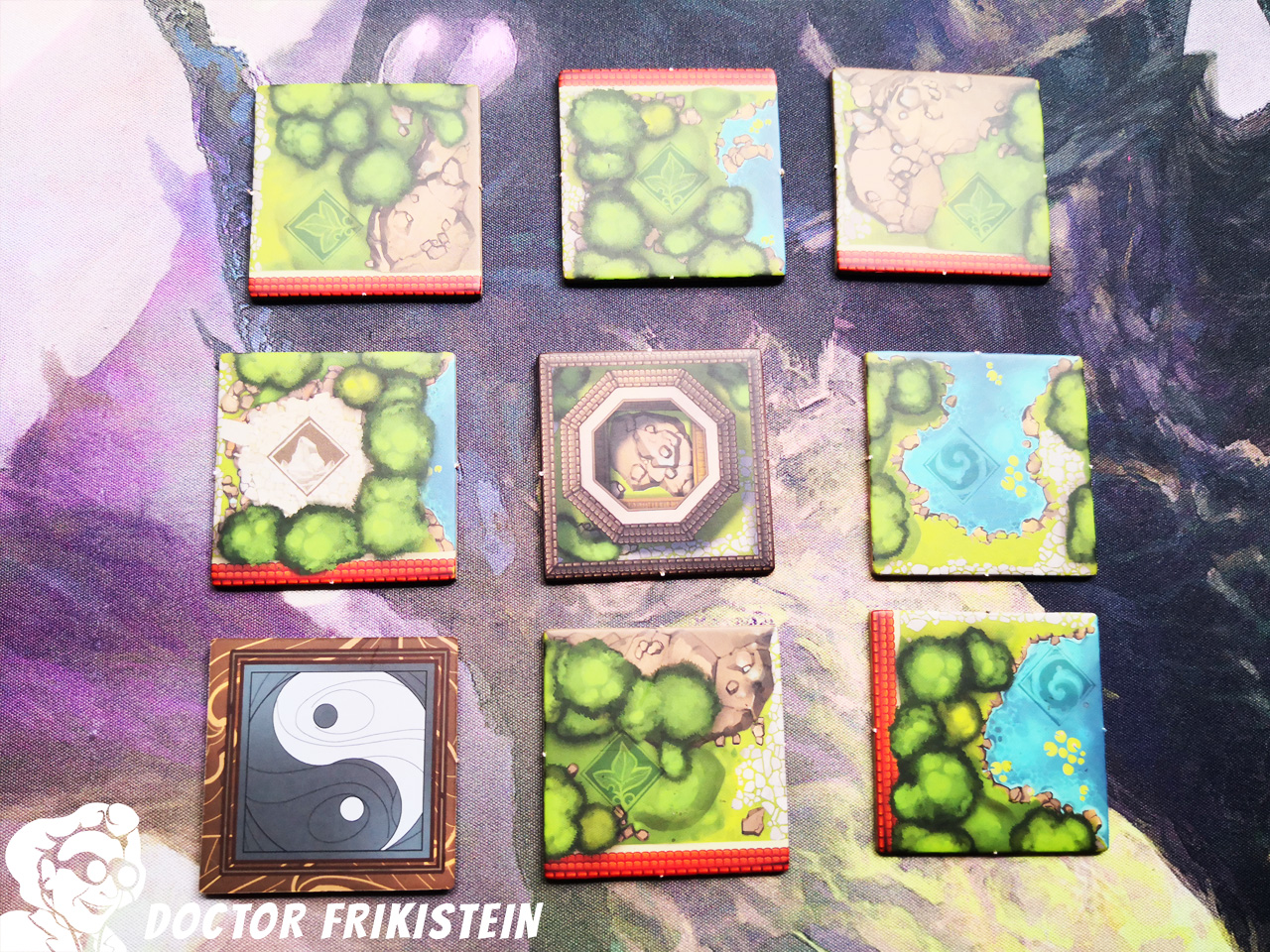 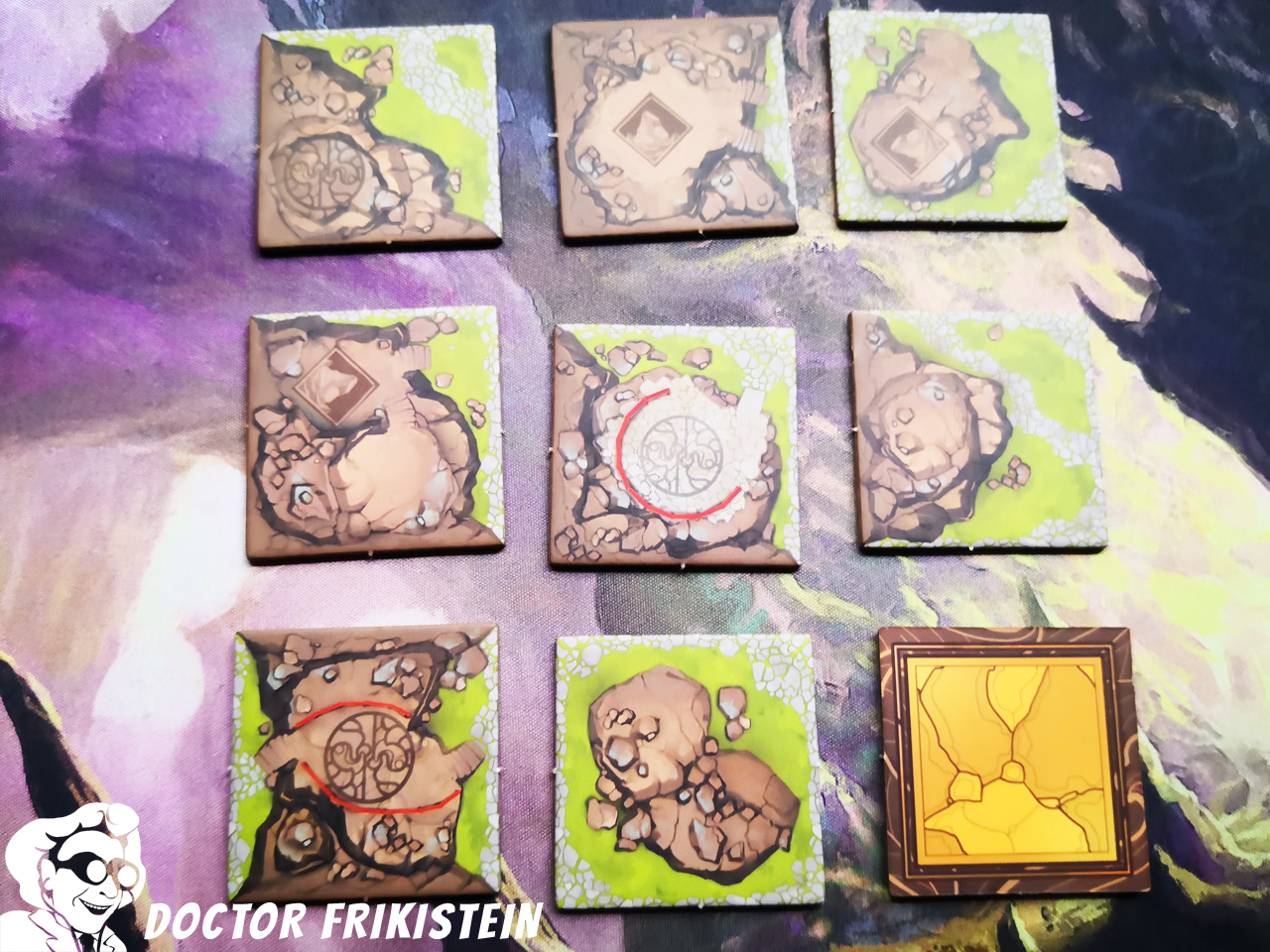 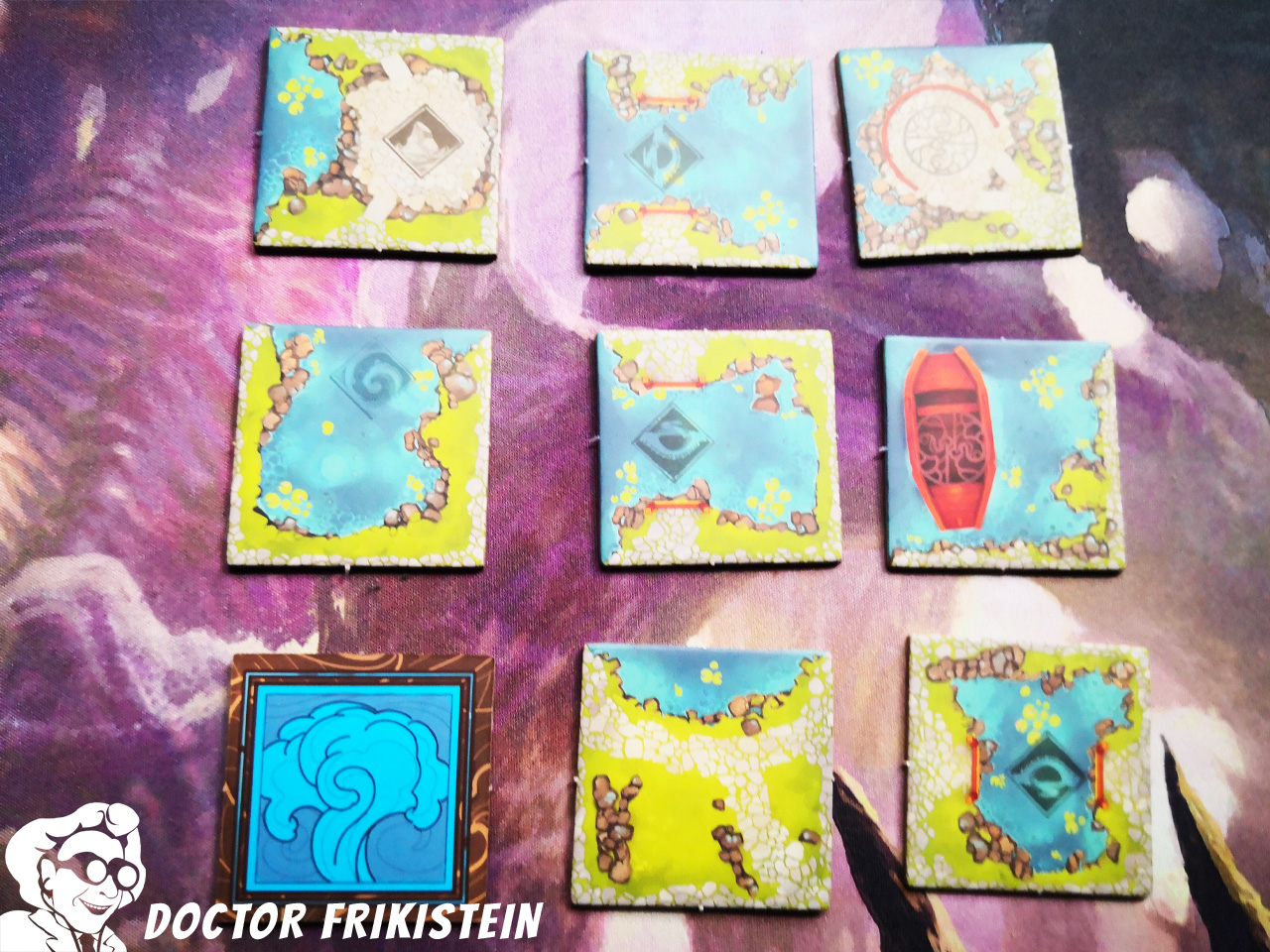 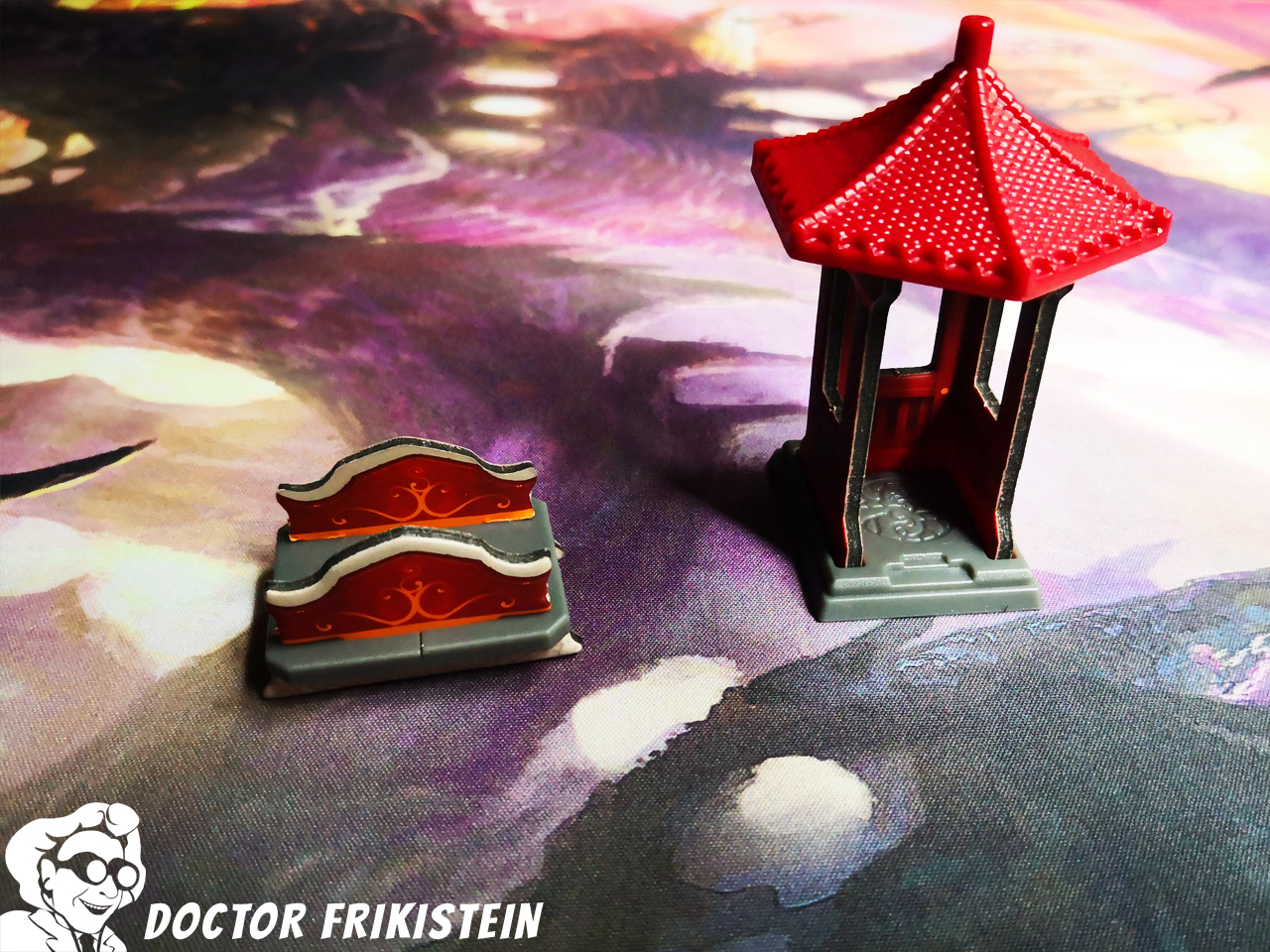 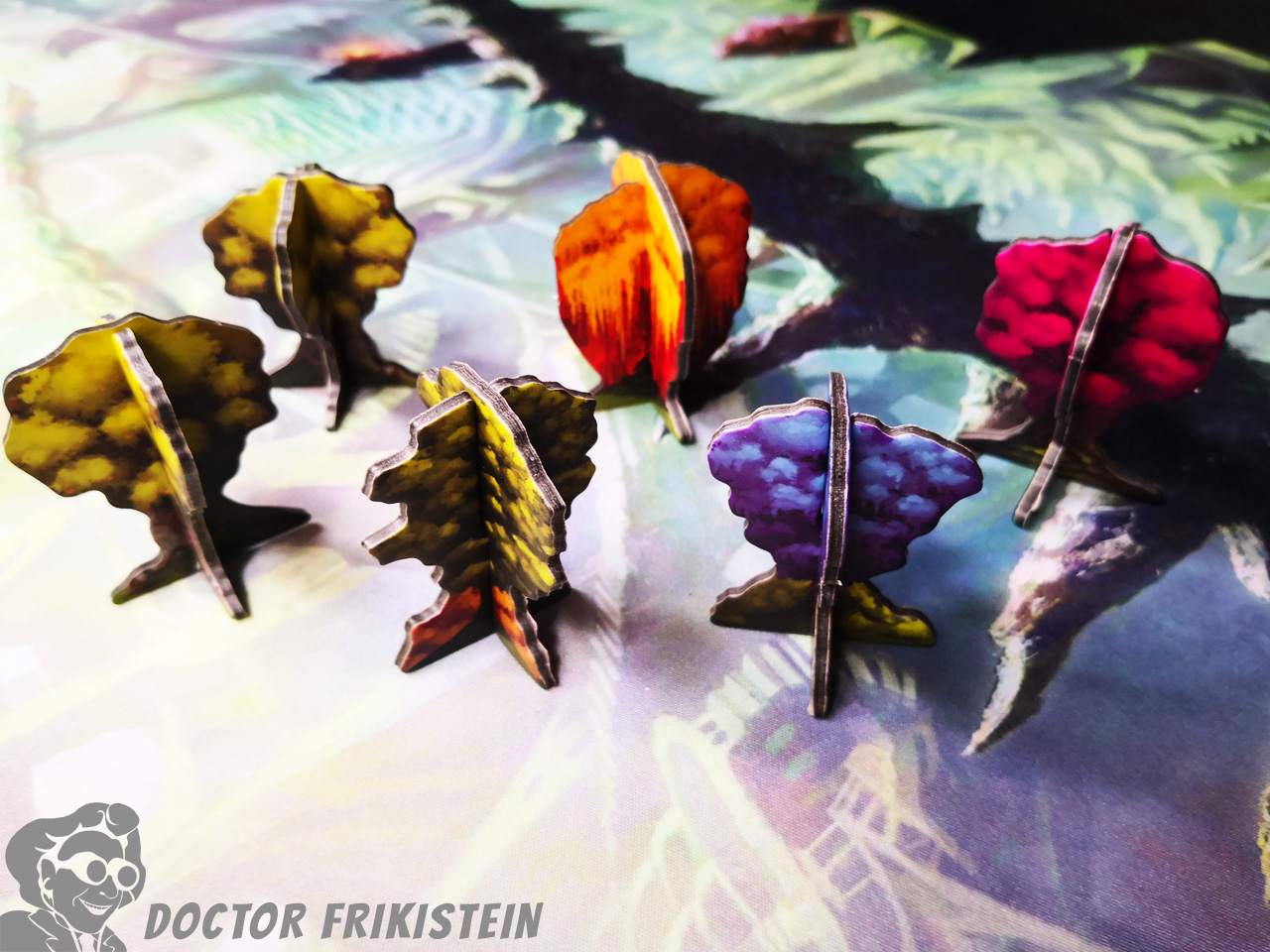 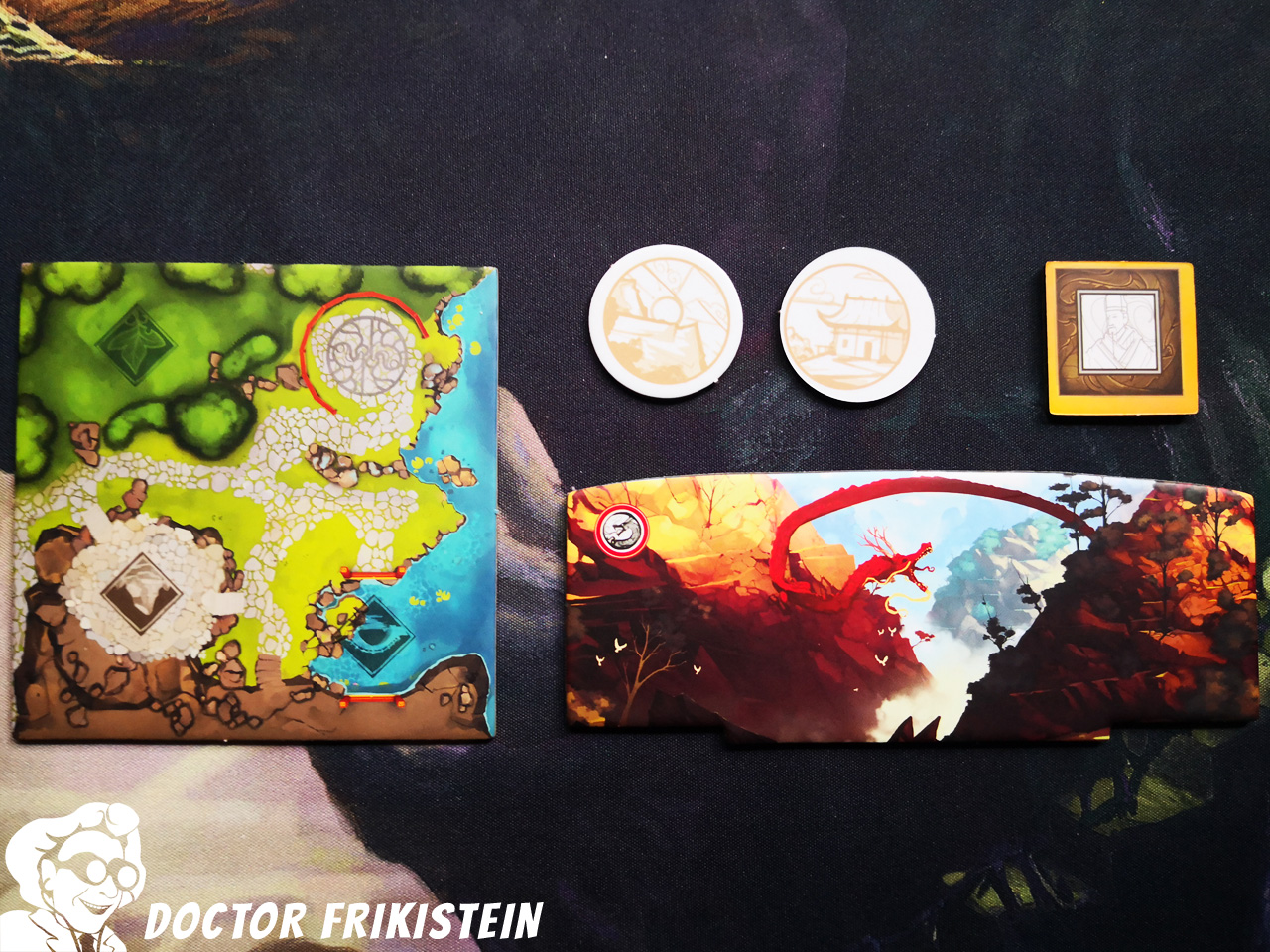 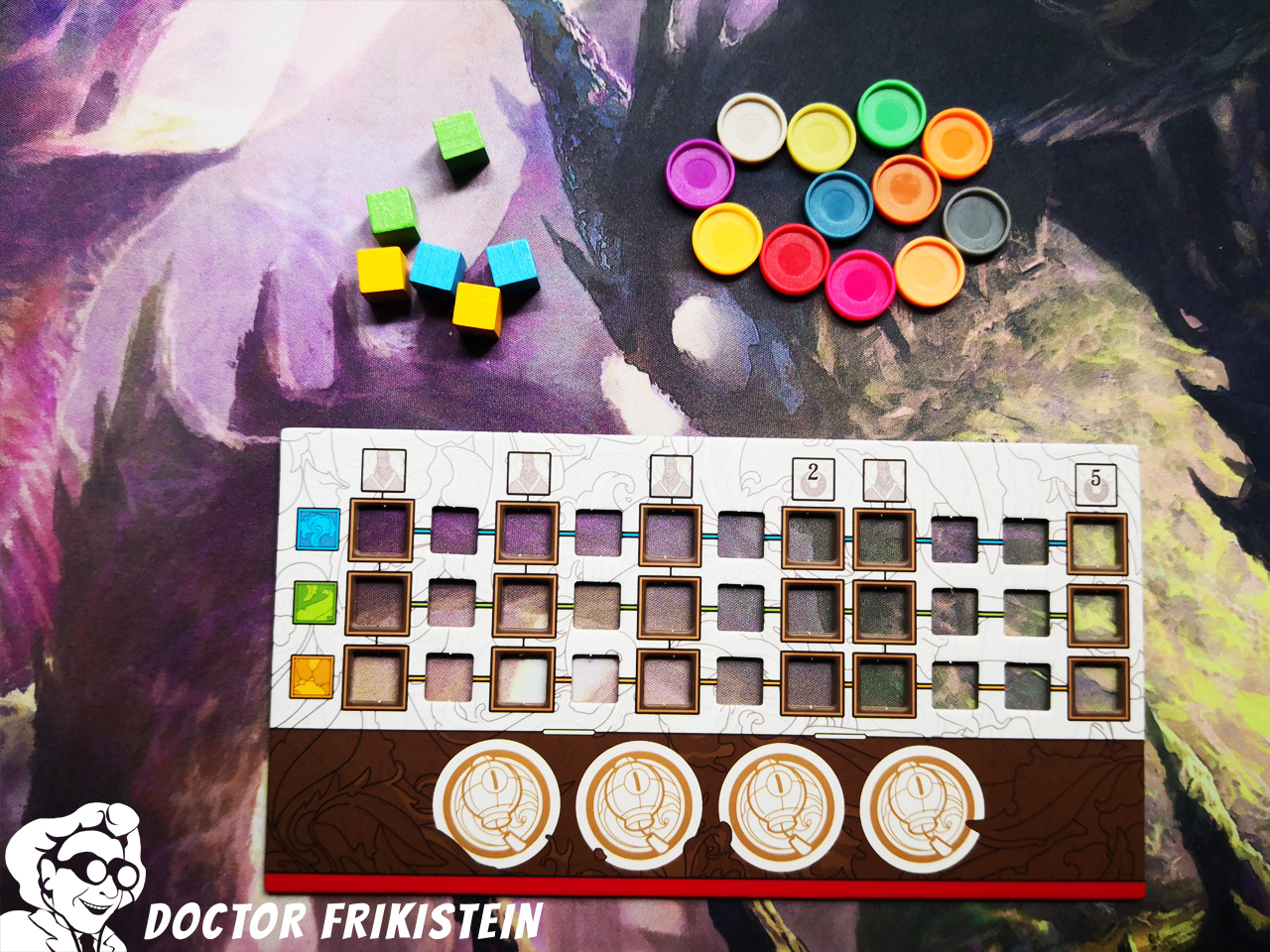 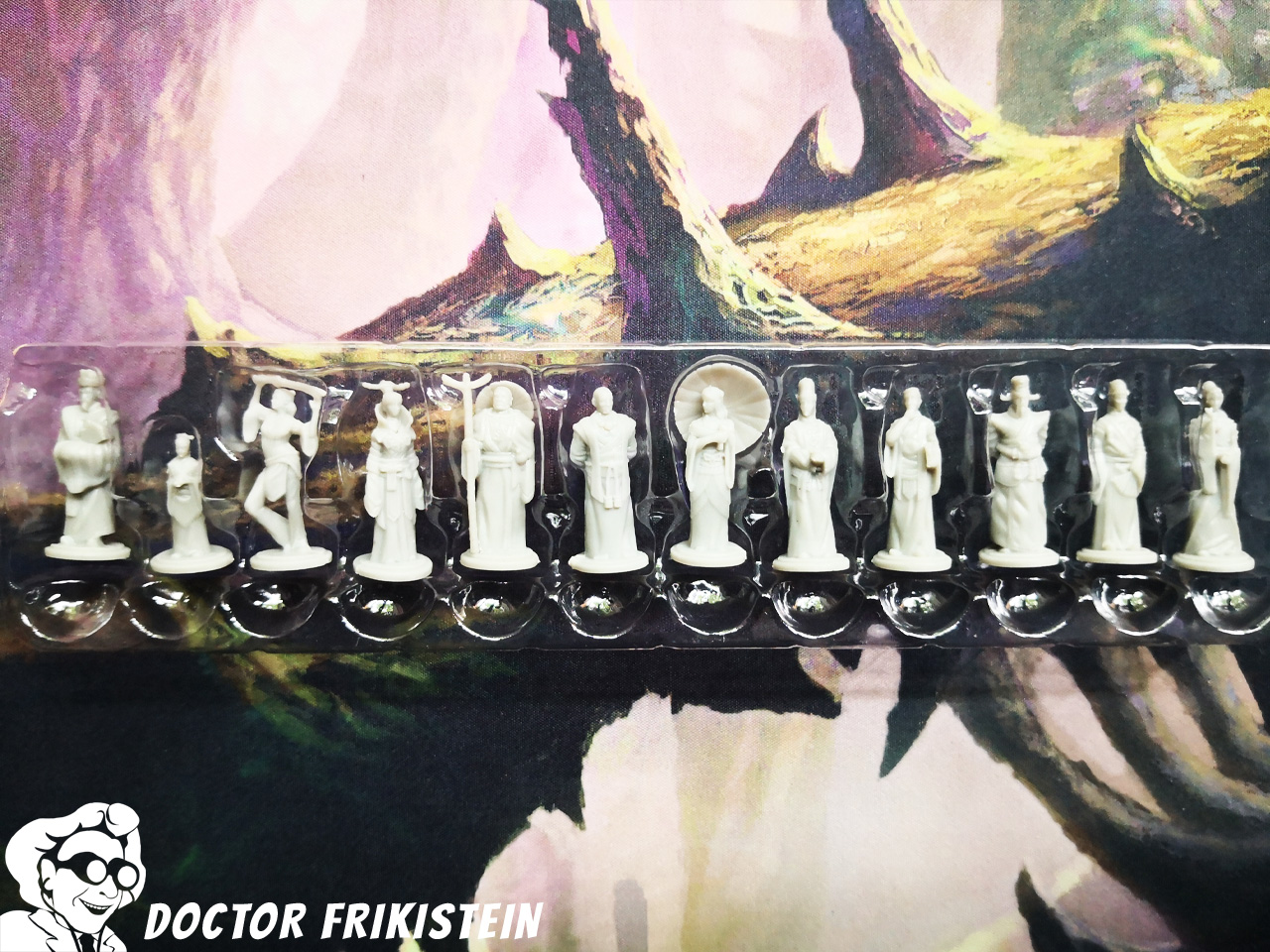 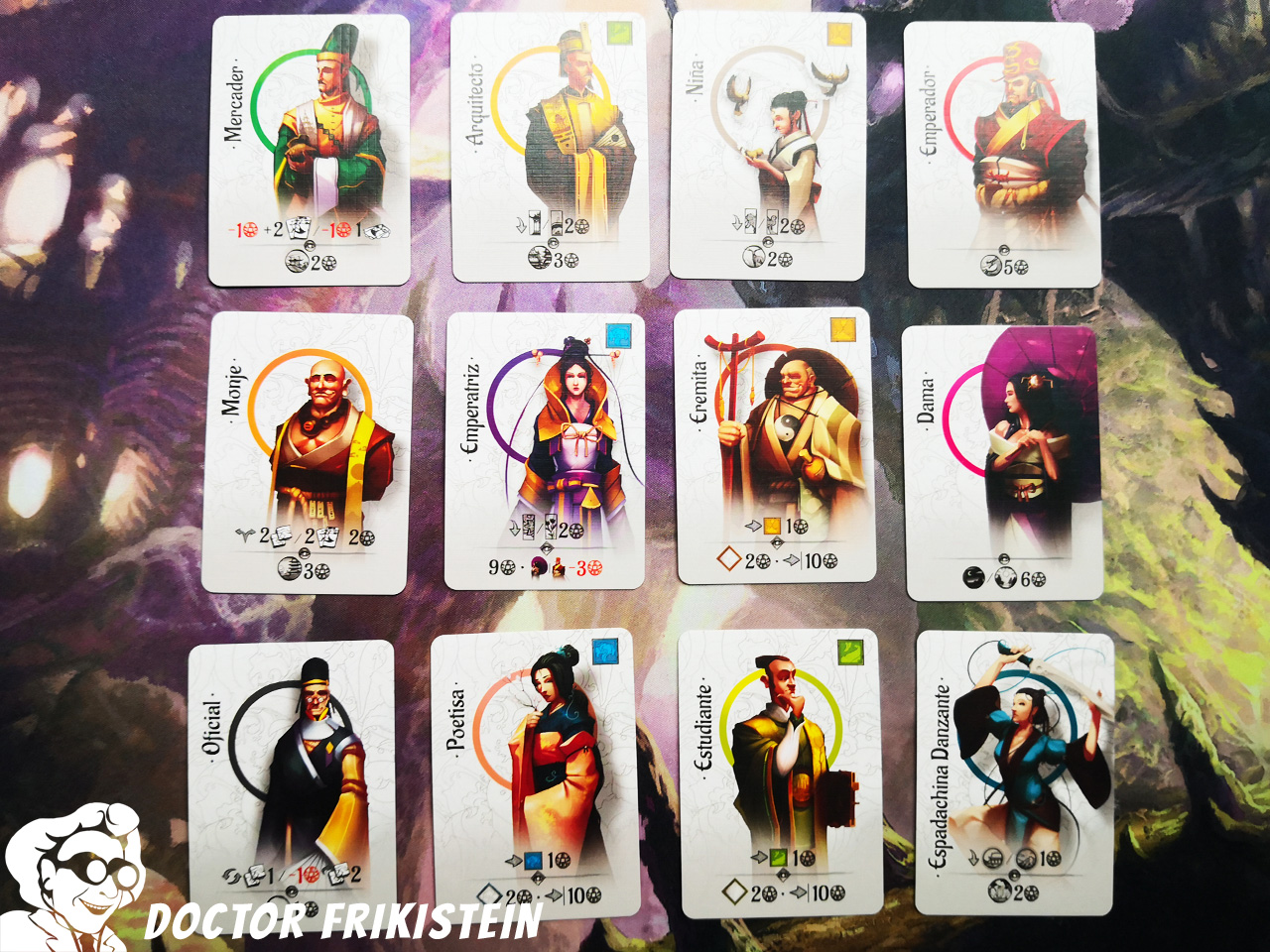 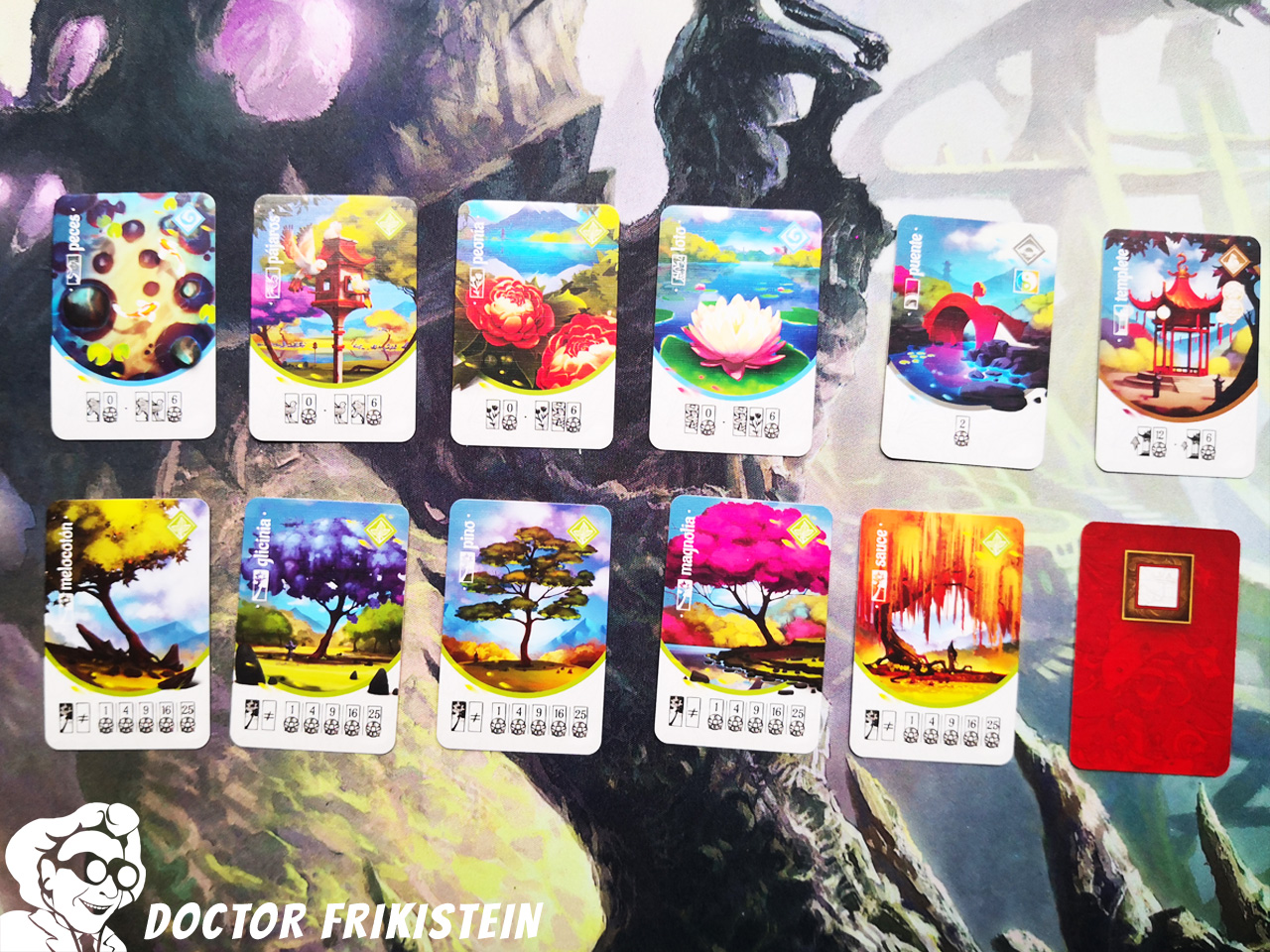 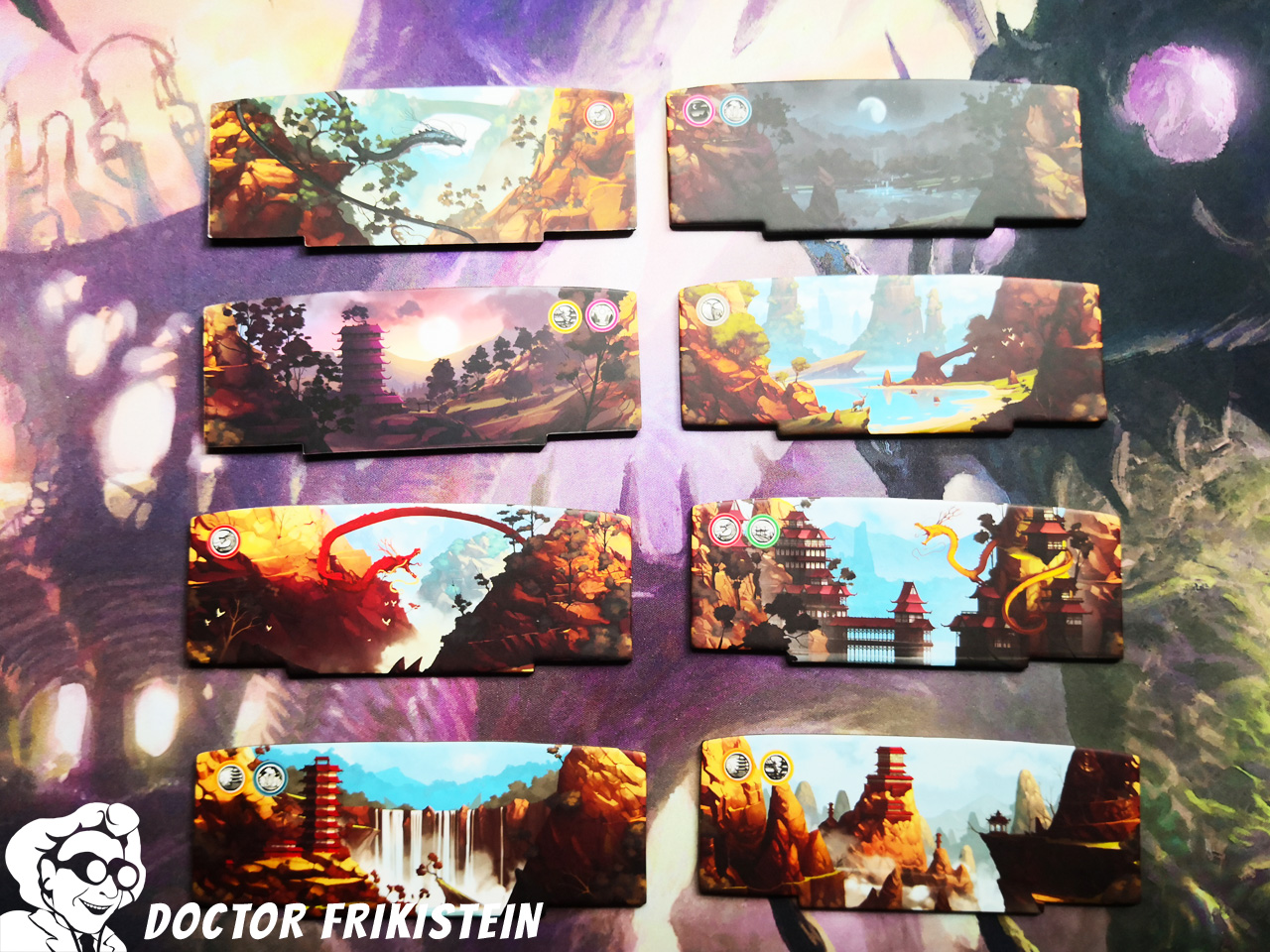 Tang Garden is a small step forward in titles based on tile placement and set collection, without offering exuberant difficulty when playing it, making it perfect as a family game. You are not facing a brainy game of those that will make you burn neurons in each game that you play. The size of the box does not imply in this case extreme “analysis-paralysis”, but rather a simple and light mechanics linked to a somewhat high financial outlay due to an overproduction of all the material it contains. In fact, in my opinion, this overproduction could have reached higher levels if they had wanted. And i fact if you don’t think about ​​enjoying the aesthetics of Tang Garden, better you will not acquire it. As a general rule, tile laying games are not difficult to learn or master, and this is no exception. Of all the tile placement games I’ve played (Carcassonne, Cacao, Horus and Isle of Skye) this title is the most “complex” I’ve ever played.