In this article you will find the review of the board game Dinosaur Island where we analyze all the DNA of this game. Your will find photos of all the dinosaurs and components included in this Eurogame.

In Dinosaur Island you are managers of a theme park whose main protagonist is dinosaurs. Through DNA preserved in fossils of these ancient creatures you have discovered the way to clone them. In this way, people could see them with their own eyes in the flesh, not imagine them through books or visualize them in movies and video games … Managing the park will not be an easy task: you will need to hire staff, build attractions that seduce the public, investigate genetic designs to create new types of dinosaurs, keep the enclosure safe …

Dinosaur Island games take place in rounds. A round is divided into five phases:

4 – Park Phase: During this phase visitors come to the park and players win money and score victory points.

5 – Cleaning Phase: a rest phase to prepare next round.

The game ends when all but one of the target cards in play have been claimed. Target cards add conditions to players who, if they meet them, can claim them for extra points. There are three types of objective cards: for short, normal or long games. Use of one type or another depending on how long you want a game of Dinosaur Island to last.

Dinosaur Island is another title born under the influence of the latest Jurassic Park movies. In fact, it is quite likely that when you see their covers you will see the nostalgic streak of the first film that was released years ago. You can hit me one more time, I haven’t seen any Jurassic Park film. I imagine that it is another crime committed against the world of cinema. The dinosaur theme was not that it was heavily exploited in the world of board games. For me Dinosaur Island has been the first eurogame I have played on this theme. Like any game of this style, it is already known that it costs to be original in terms of mechanics. I give it the score that I give it in this section because for me it has been a novelty and because, what do you want me to tell you, I find it a lot of fun to see how the people of your Jurassic park can be devoured or trampled by dinosaurs by not having sufficient security.

During the tests, a friend had the idea (which was not carried out) to put names of known people (friends, family …) to the meeples, in such a way that when someone died there would be the joke of who had patted them. As a negative point I will say that there are laboratory improvements and specialist letters that are very over, offering exorbitant advantages. That it is free to increase the security of the park or that you receive DNA samples every time another player increases his own DNA reserves, I did not see clearly …

Note by David Santas: My son and me love Jurassic Park Saga. In fact it was my son who noticed a very geeky detail: The “Dinosaur Island” gate.

If Dinosaur Island has a good thing, it is that you will rarely play an identical game compared to the previous ones. The great variety of objective cards and the few plot twists that the title contains cause there to be a large number of combinations between them. In addition, you have the possibility to play games with three degrees of duration: short, normal or long. We played a normal game and it lasted two hours or so, of course it was the first seriously and two players, with the manual minimally studied. Therefore, replayable is and will be difficult to be tired of it, but you have to consider to spend at least an hour and a half to place it on table.

Dinosaur Island is not difficult to learn. However, it requires your hours of study and patience. The manual is perfectly structured and very well explained. I had no problem at any time, I understood everything the first time and at once. In addition, it comes full of examples. The score given in this section is basically because it takes your time to study it and because I highly doubt that an eight-year-old boy, the age recommended in the title box itself, has enough patience to sit down, listen to the whole explanation and endure at least 45 minutes. or an hour (for a short game) playing a game that is generally slow. Be realistic, you can’t compare ti with Carcassonne, which is also for eight years …

Pretty meeples, cool dinosaur figurines (although they are all the same, but I guess it’s not to make the game more expensive), considerable tile thickness, decent game boards … It’s one of those titles that paying around 60 euros doesn’t hurt in the soul, the quality of the material is obvious as soon as you open a copy. And everything is very colorful, which seems very nice to me. If there is something wrong to indicate in this section it is difficult putting all the material again in the box after having played it for the first time.

All dinosaurs of Dinosaur Island on our  board game mat. 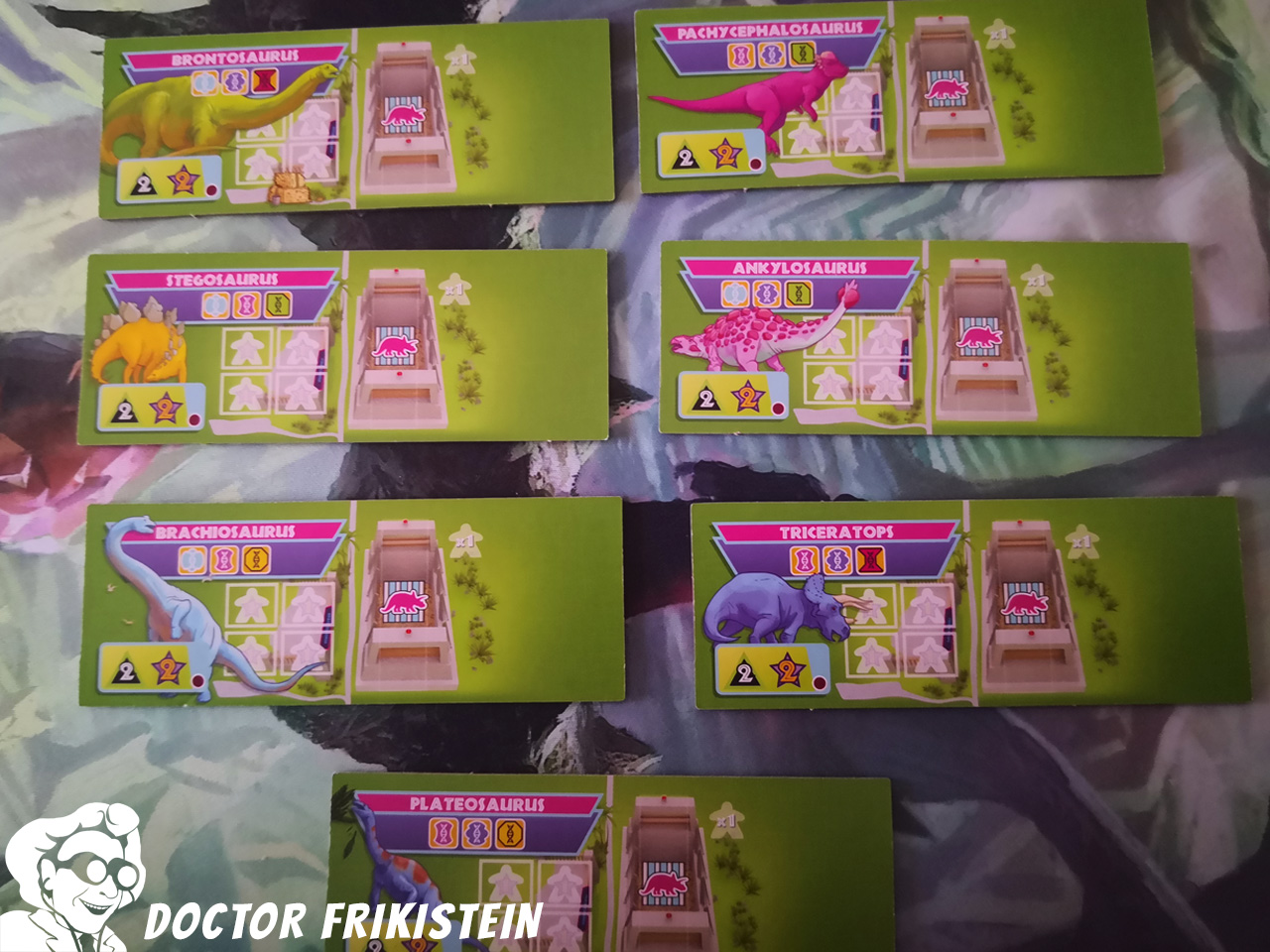 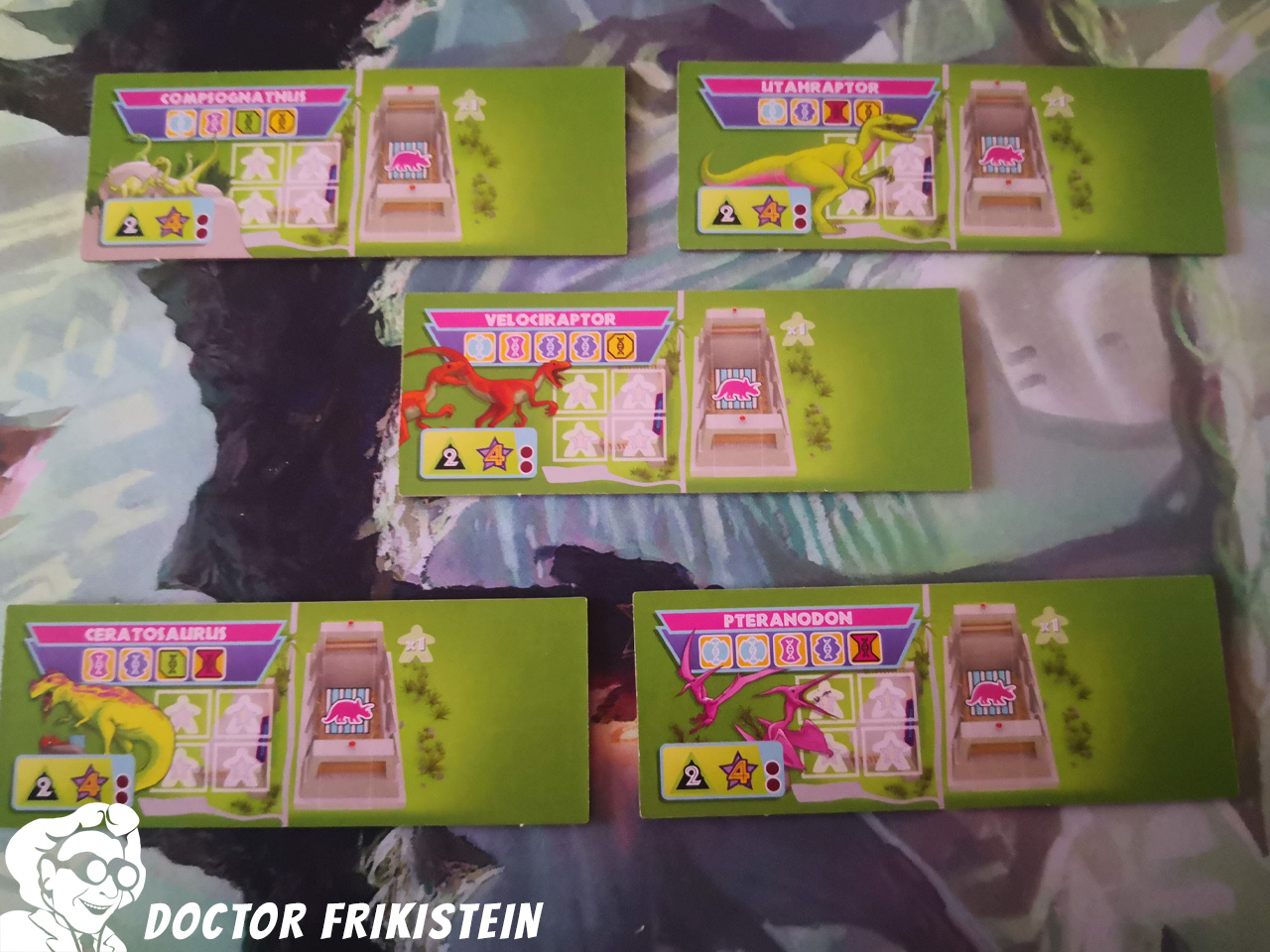 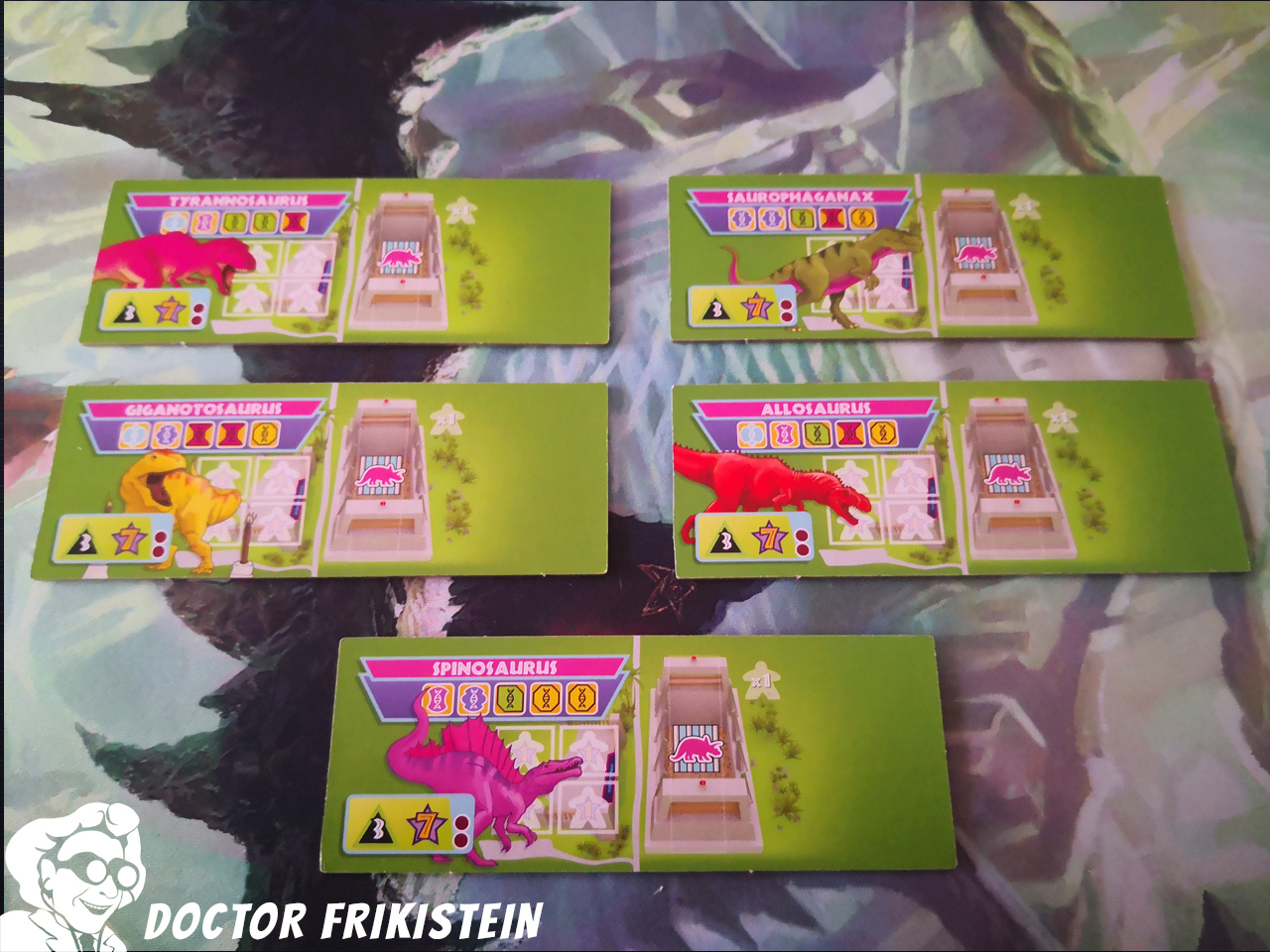 I liked Dinosaur Island. We already have it in our personal playroom. What most caught my attention was that it was about dinosaurs, which is why we gave it to a friend for his birthday (he is a fan of these animals). Add to this that we do not have any game of this theme.I think it is a good acquisition if you like eurogames, since as much as it is dinosaur if you do not like this style of games it is wasting money. If your idea is to have it as a game to play with the family, I do not think it is a good one one unless the child is very predisposed to endure a long explanation and games of at least an hour. In short, a good game with precious and quality materials, easy to learn although it requires your study time and with a replay value that is acceptable. Recommended.

The Doctor Frikistein reviews are made without any sponsorship and with games purchased for our property.