In this article you will find the Review of the board game Paranormal Detectives where we are going to contact the afterlife to reveal all its mechanics, as well as photos of all the components included in this chilling narrative deduction game.

Paranormal Detectives is a narrative party game. One of the players must play the role of Ghost, who represents the recently deceased victim in each of the twenty-eight cases that make up the game. The rest of the players are Detectives who compete to see who will be the first to find the correct answer to the following questions or clues by interrogating the Ghost player.
– Who was the person or creature responsible for the death of the victim?
– Where did the death occur?
– Why did the victim die?
– How exactly did the Ghost die?
– What was the weapon, object or tool that caused the death of the Ghost?

The Detectives play an interaction card on their turn while questioning the Ghost player for important information in order to answer the questions previously asked. The interaction card played leads the Ghost to respond by mime, drawings, using the Tarot cards included in the game …

The game is started by the Detective who has seen something creepy most recently and proceeds clockwise.

Detective players and Ghost play cards and take notes on their boards to help following the clues.

END OF THE GAME

Each Detective has two attempts per game to correctly answer the following five keys: Who? Where? Why? How? and Weapon?. The first to succeed is proclaimed the winner, and the Ghost player too.

The game also ends in one of two ways:
– All the Detectives have made their two attempts to correctly answer the five keys and none have succeeded.
– All Detectives have exhausted their interaction cards.

In this case the Ghost player does not win, as he has failed to make any of the Detectives respond well to the five keys. However, there is a winning Detective, and he is the one who has correctly answered the largest possible number of questions. If there is a tie between several Detectives, the winner is the one who has answered the highest number of keys correctly on their first attempt.

The first thing players will think when reading the Paranormal Detectives manual is that they are facing a game similiar to Cluedo because they must to find the answer to the five classic questions: What? How? Where? Why? and Weapon?. On the other hand, it can also be reminiscent of games like Black Stories, whose mechanics are mainly based on asking a player who acts as the master turn after turn (in Paranormal Detectives it is the Ghost) in order to obtain the necessary information to answer the questions mentioned above.

What is it that has caught my attention in this paranormal detective game? The fact that there are different ways of answering as a Ghost to each of the questions that the Detectives are formulating: miming, drawing, making images with the Tarot cards and with the strings … If something stands out about Paranormal Detectives, it is that you need a minimum of improvisation and imagination, as well as some narrative skills, because it is definitely a very narrative game. Therefore, the gaming experience can vary considerably depending on the group with which it is played. You can give a touch of humor to the game, terrifying, spicy … What matters in the end is, during your deductions, mention the words assigned to each of the keys of the story card that you have played in the game.

Unfortunately, this title is in the personal catalog of games that I will not acquire in my life. I am not saying this because the game seems bad to me (because it is not, honestly), but because narrative and deductive games are simply fatal to me in which you must use your own improvisation and imagination to solve each of the cases that make them up. However, deduction games like Cryptid or Shadows over London I love playing them, since they are limited to having to deduce through a board and certain clues. If a narrative factor were added to them to have to play them properly, I would be bored with them without a doubt. I also highlight that games in which you have to draw and mimic I totally ignore them… They are game mechanics that I don’t like at all.

Therefore, I consider Paranormal Detectives to enjoy improvising and constantly unleashing the imagination. If you are players related to party games like The Werewolves of Millers Hollow, Aye, Dark Overlord! and Time’s Up! (for putting three titles of the same nature) this one will not disappoint you.

In this section, the game undoubtedly deserves the score that I have given it according to my criteria. The manual is perfectly structured and is well understood. With a single reading you will learn to play it and you will carry out your first game without any problem. Ten minutes of reading and go! This is the positive part of games of this style, they have few rules and learning is almost instantaneous.

In this other section Paranormal Detectives stands out above all. I like the aesthetics of the game, with that dark touch it has. In addition, the general atmosphere of the game is reminiscent of cartoons, which makes it less serious. The Detective Investigation Sheets and the Ghost Sheet are dry-erase that you can write and erase with the markers included in the game. It is already an indicator of a good material. The interaction cards and Tarot cards are normal, although they are not used extensively, so pack them if you are very fussy, in the box you have plenty of space to save them.

To highlight as negative points we have: that the game box is horribly soft, something that with few trips I imagine it will suffer serious consequences; that there are too many Detective Screens, which are used to cover the Detective Investigation Sheets so that the rest of the opponents cannot see what is written on them, something that, in my opinion, with turning them face down is more than enough. There is nothing more crappy in a board game than adding totally unnecessary material.

Paranormal Detectives displayed on our board game mat: 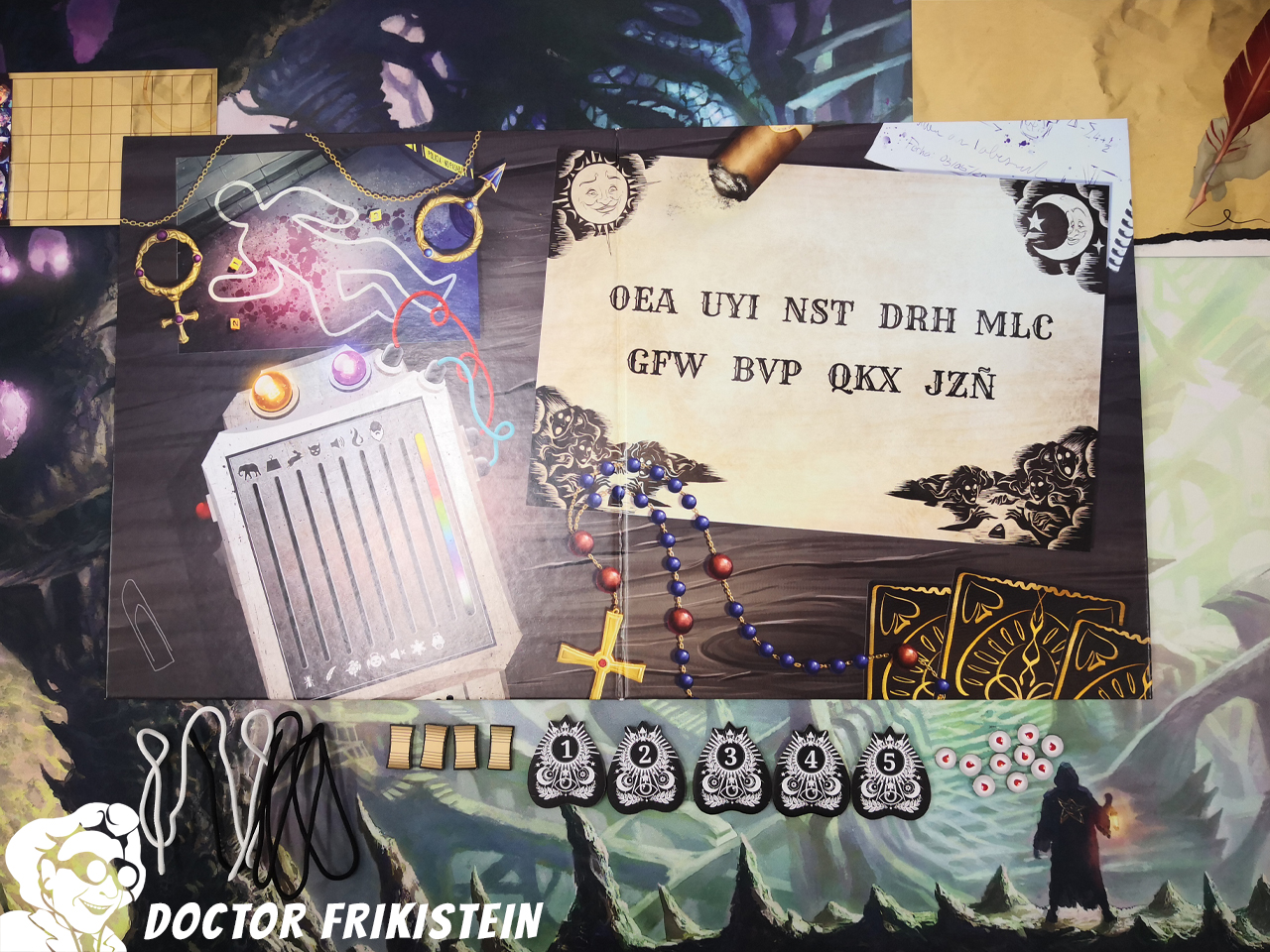 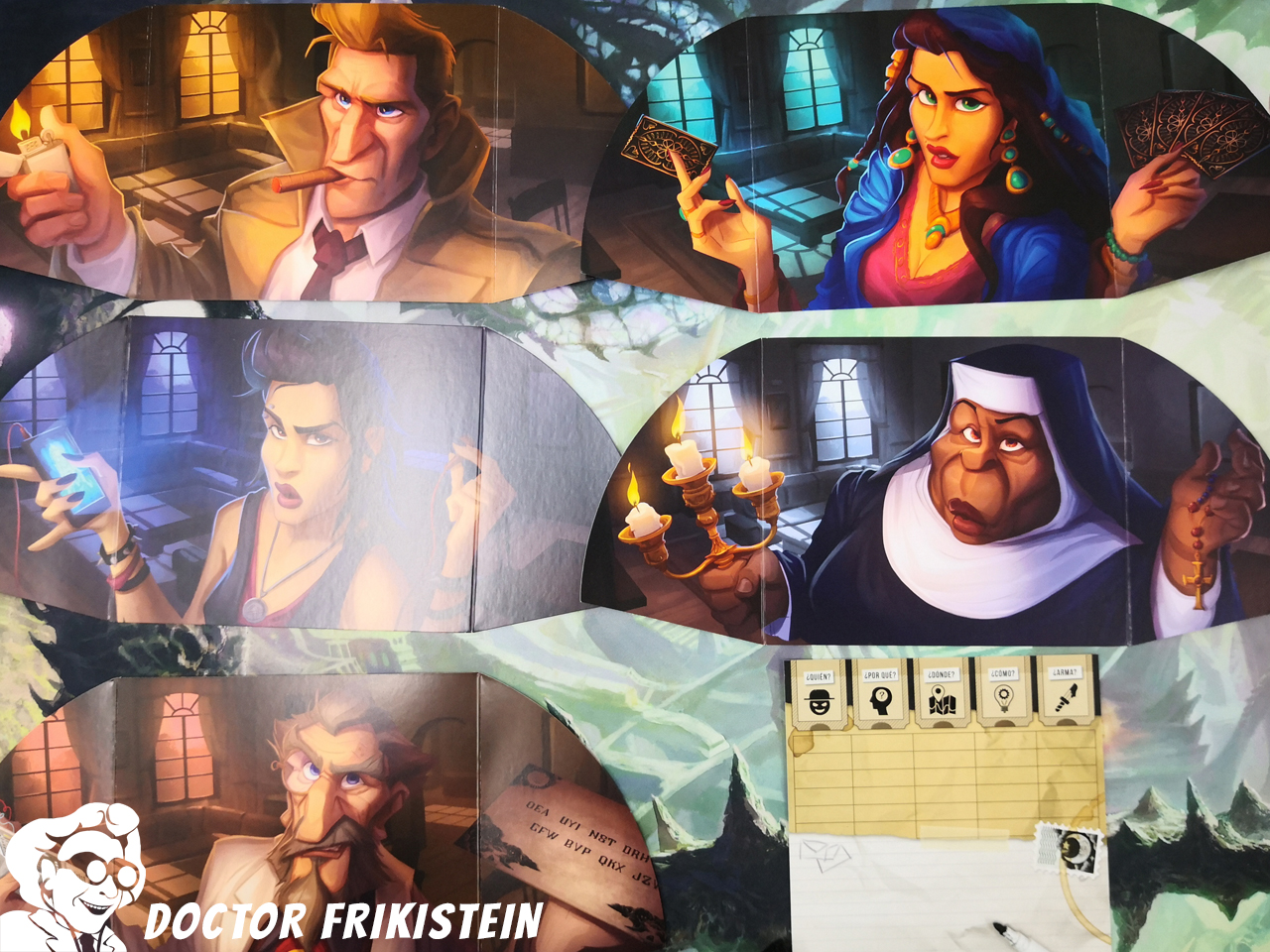 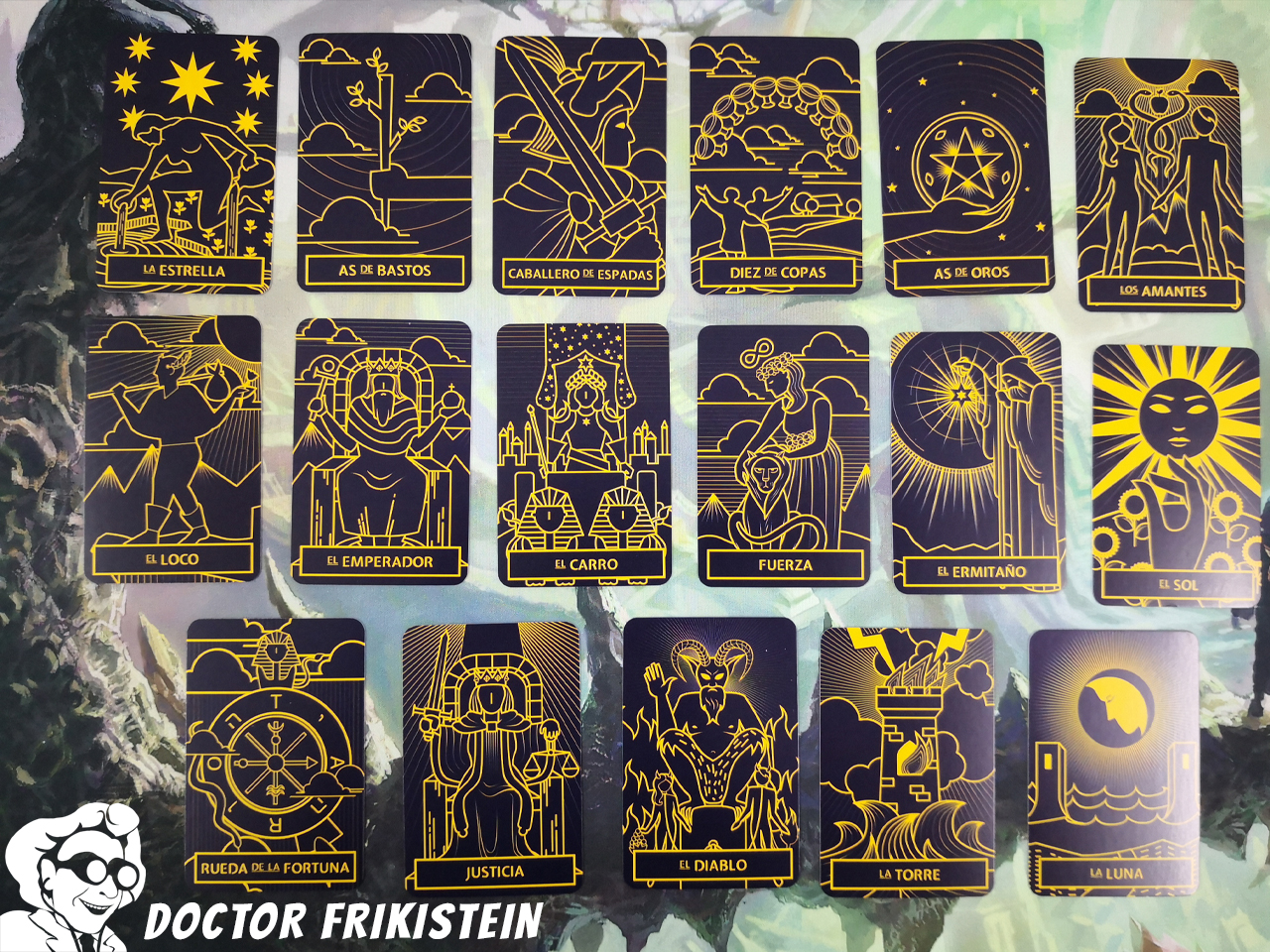 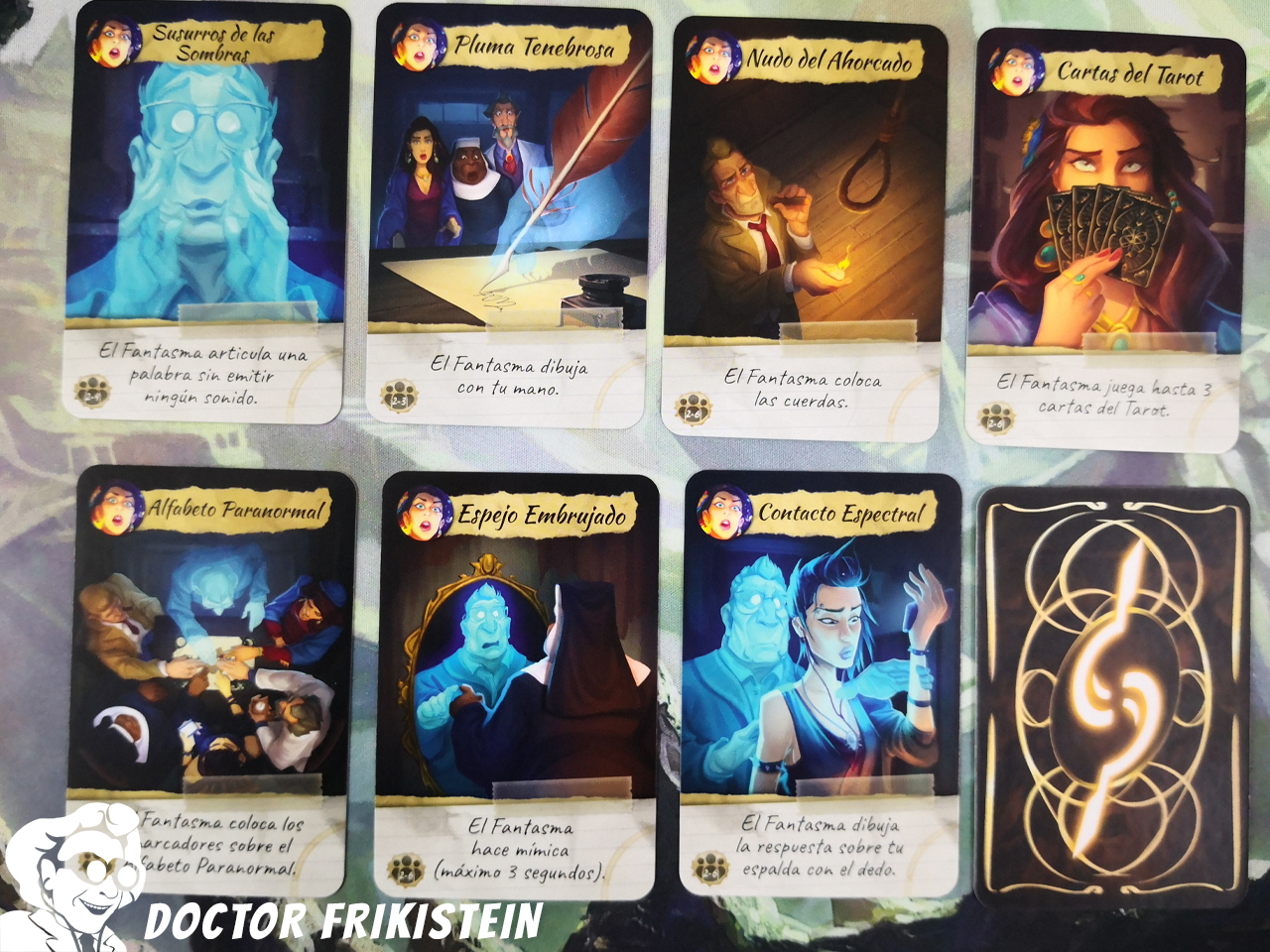 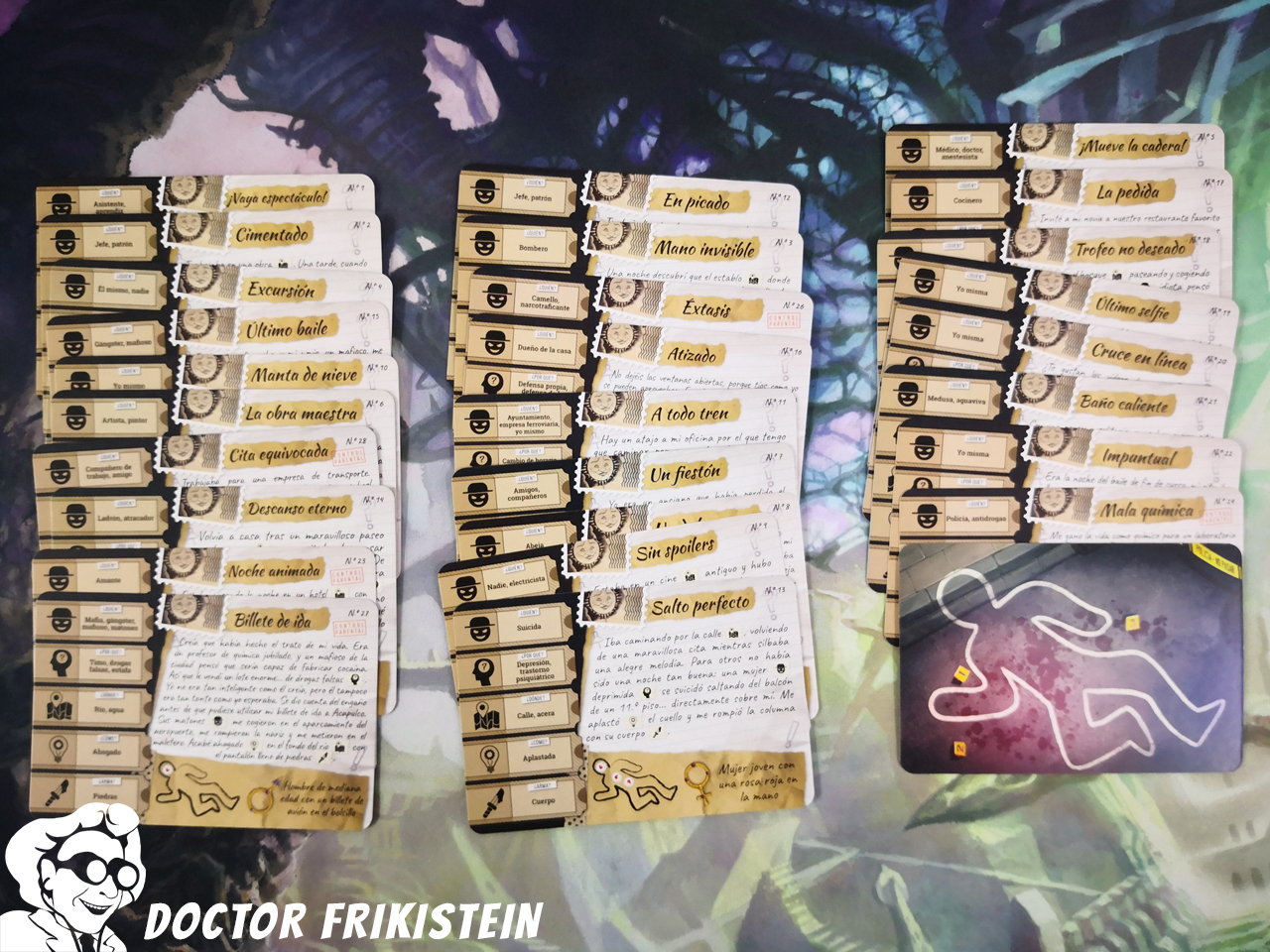 I don’t like much Paranormal Detectives because of the details described above: I do not play well with deductive games in which you have to pull narration, improvisation and imagination. Still, I do not think it is a bad game, it seems original to me that the Ghost should respond to the Detectives with the method that they indicate. In the end, with this game you will end up doing a bit of everything: mime, drawings, compose images with the Tarot cards … This variety of ways of answering by the Ghost may like more or less, of course, but I think it is part of the essence of the game. I also think it is more enjoyable if you get into the role of the characters, that is, if you add a certain role-playing touch to the deductions of the Detectives.

One downside to the game (regardless of whether I like it or not) is that there are twenty-eight cases. Once solved the game is over until you forget the cases. Another option is to search the Internet for more cases to give it more life, of course. The thing is that Paranormal Detectives is one of those games whose useful life can end quickly depending on how much you play.

Would you recommend the game? Yes, as long as you like the party games of, I insist, improvise, narrate and pull your imagination. I think it is ideal for family audiences and for those looking for simple and quick games to learn. For role players it can also be a good piece to acquire.