In this article you will find the review of Wacky Races board game  based on the popular animated series. We also show you the unique skills of each vehicle that will help you escape the traps of  Dick Dastardly and Muttley to win the race.

Wacky Races is a race in which the first player to cross the finish line wins. To achieve it you will have to use the movement cards that you have in your turn and the different skills of the chosen pilot. Be careful with the traps that the villains Dick Dastardly and Muttley place throughout the circuit!

Be the first player to reach the finish line.

The race takes place in a circuit divided into:

Players start the game and each of their turns with three movement cards in their hands. These cards are the necessary ones to be able to move the pilots through the circuit. In each of the boxes of the starting grid and in each of the terrain tiles there can be two pilots at most: one located on the left and one located on the right. Dick Dastardly and Muttley move forward by placing their figure on these tiles, never on the sides.

In his turn, a player can move his pilot up to three squares following these rules:

All pilots have four advantages (skills) that can be used at any time during the turn. With them is possible to do additional movements and hamper the other players.
Once a player has moved his driver, he must draw movement cards from the deck until he has a minimum of three.
After drawing movement cards, the current player has to look at what type of terrain shows the last card he has played, that is, the card that is at the top of the discard pile. Dick Dastardly and Muttley will move to the next position that shows this type of terrain and that does not contain a trap card. If moving in this way, it has been placed in front of all other pilots, a trap card must be placed face down in the position it currently occupies. If this is not the case, it stays as far as advanced. If you have managed to place a trap card, you must go back to the square that is just behind the last pilot.

After Dick Dastardly and Muttley movement, the current player’s turn ends. The nex player is following the clockwise direction.

When all the players have acted, that is, when the round is over, it is the moment when the neutral pilots move. Of these there will be as many in the game as necessary as long as there is a minimum of six drivers in play. For example, if you played four players, you would have to use two neutral drivers.

The neutral drivers act as follows (omitted in the first round of the game):

When the neutral drivers move, the first to do so is the one in the lead, followed in order by the others, in such a way that the last to move is precisely the most backward.
When a neutral driver activate a trap, he suffers the effects as well, as if it were a player driver.
Moving neutral driver does not cause Dick Dastardly and Muttley to move.

When a player reaches the finish line tile the game ends.

To be honest, I have never watched Wacky Races animated serie. I knew about the existence of video games (some of GameBoy if I remember correctly). But I’ve never been a great TV watcher The game can give you all the nostalgia you want and surely most will buy the game precisely for Wacky Races. For the purposes of how the game is … well, I think is not very good, but not bad either. Let’s say it’s weird to see a familiar game in the Edge catalog, which usually has pretty geek and much harder games. Do not expect Wacky Races to offer you a very complicated game mechanic, it is quite similar to that used in Dino Race.

If this game can cause a furor, it is precisely for being Wacky Races. I think the game is not orginal except for using and old animated serie; they have taken the animated serie and have turned it into a board game, it does not have much merit. And the mechanics is not something new. Geek? Yes, it certainly is. Most players will buy it simply by collecting.

David note: I am fan of the animated serie =) Hurrah Dick Dastardly and Muttley!

It is what it is, a family game to hang out with no hope of contributing anything other than having luck to have the necessary movement cards to move forward. If this is not the case, you will be screwed and move one by one. The only point that I have seen funny is to be able to use advantages within your turn, which give a rush possibility. As a result, the game does not even have  interaction with the rest of the players, except for some advantages that may make truble them.
If what you are looking for is an extreme backstabbing game, forget Wacky Races. You could call them Soft Races perfectly. In fact, Dick Dastardly and Muttley do more damage with traps than the players themselves. In the end it seems to be a game of pure luck in which you advance how the movement card deck says. Yes, advantages give you some power to discard cards and steal others, but that usually is once or twice during the all the game. The rest is chance.

Here I will not speak badly of the game. Except for some details of the rulebook that in my opinion should be explained in other places (because they are difficult to find them), the game does not present any problem when your read it. In fact it has many pages despite the low difficulty of its rules. Also It contains a lot of pictures and a big writing font. It is easy to explain the game to new players. It is Ideal as an initiation game whose mechanics is based on cards.

Another of the game’s strengths is its visual section. I recognize that the figures are very well designed and faithfully represent each of the pilots who appeared in the animated serie, as well as the villain. Both the outer and inner box are very colorful, with that characteristic bluish and violet tone. In general, the game itself is beautiful, pleasing to the eye. But I want to do a special mention to the Starting Grid and to the ground tiles, which could have been made with more quality because they are only soft cards. The truth is that the material that makes up the circuit is quite shabby, with no hardness.

Unboxing and pictures of all drivers on our Board game play mat. 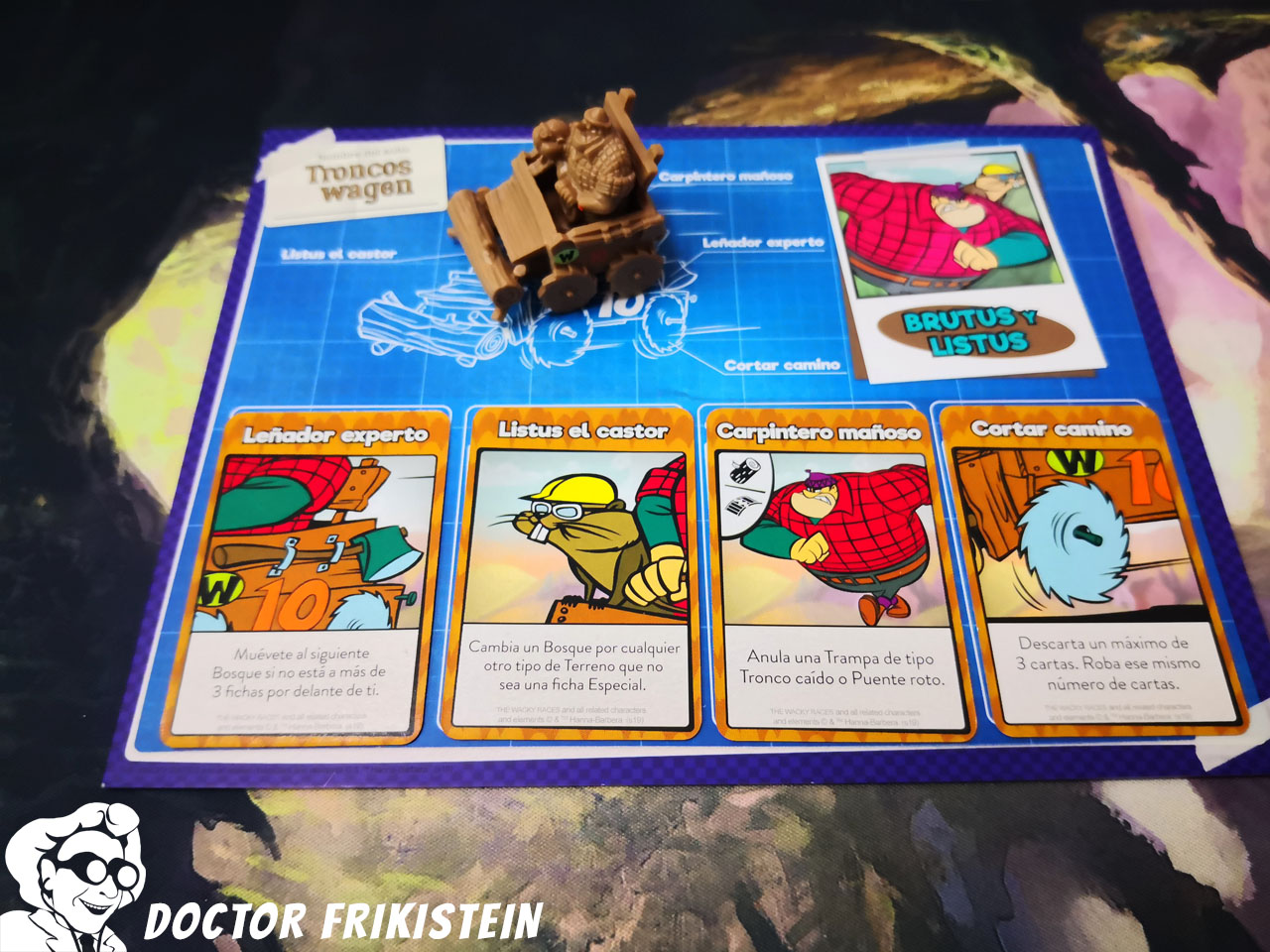 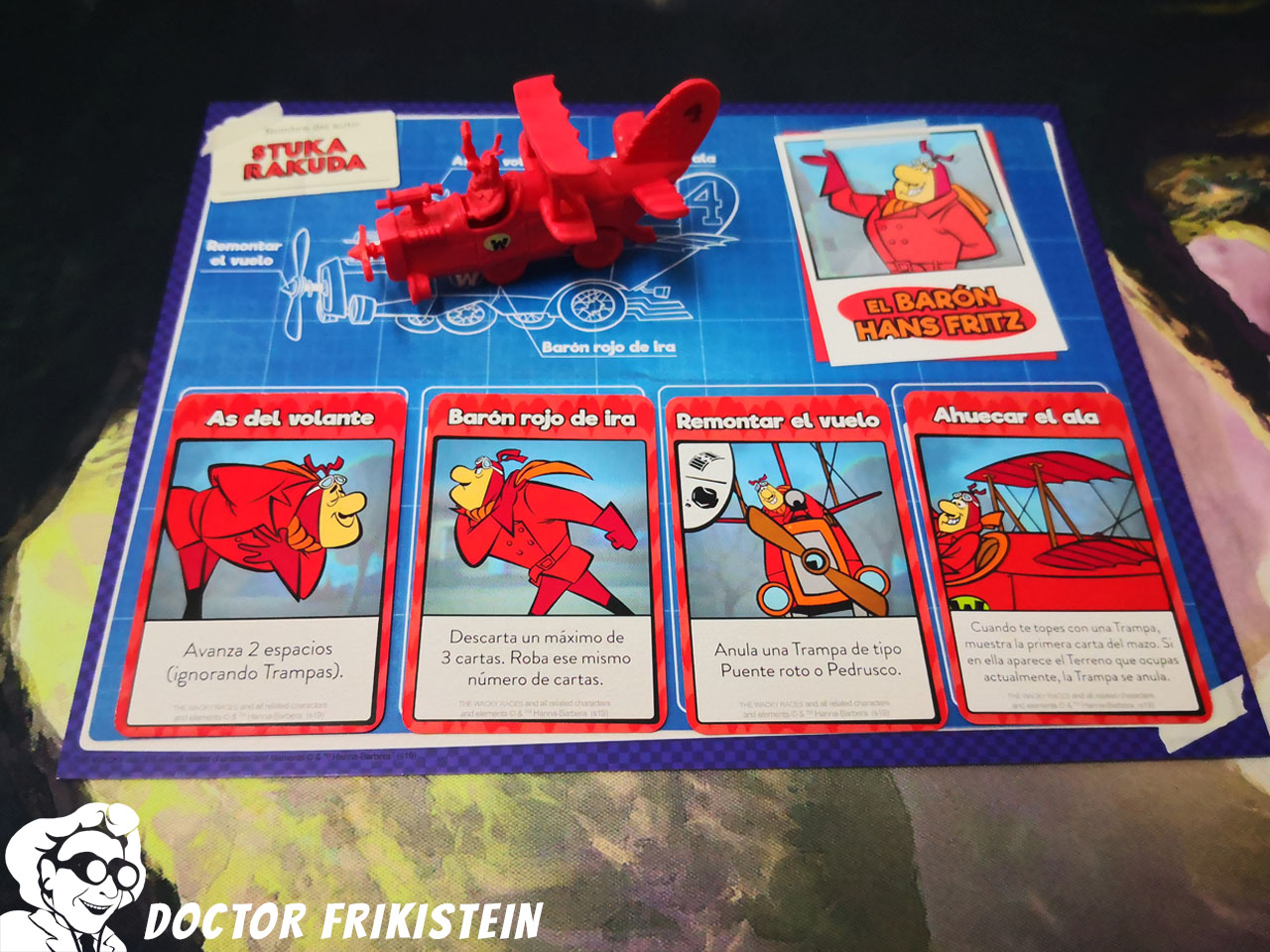 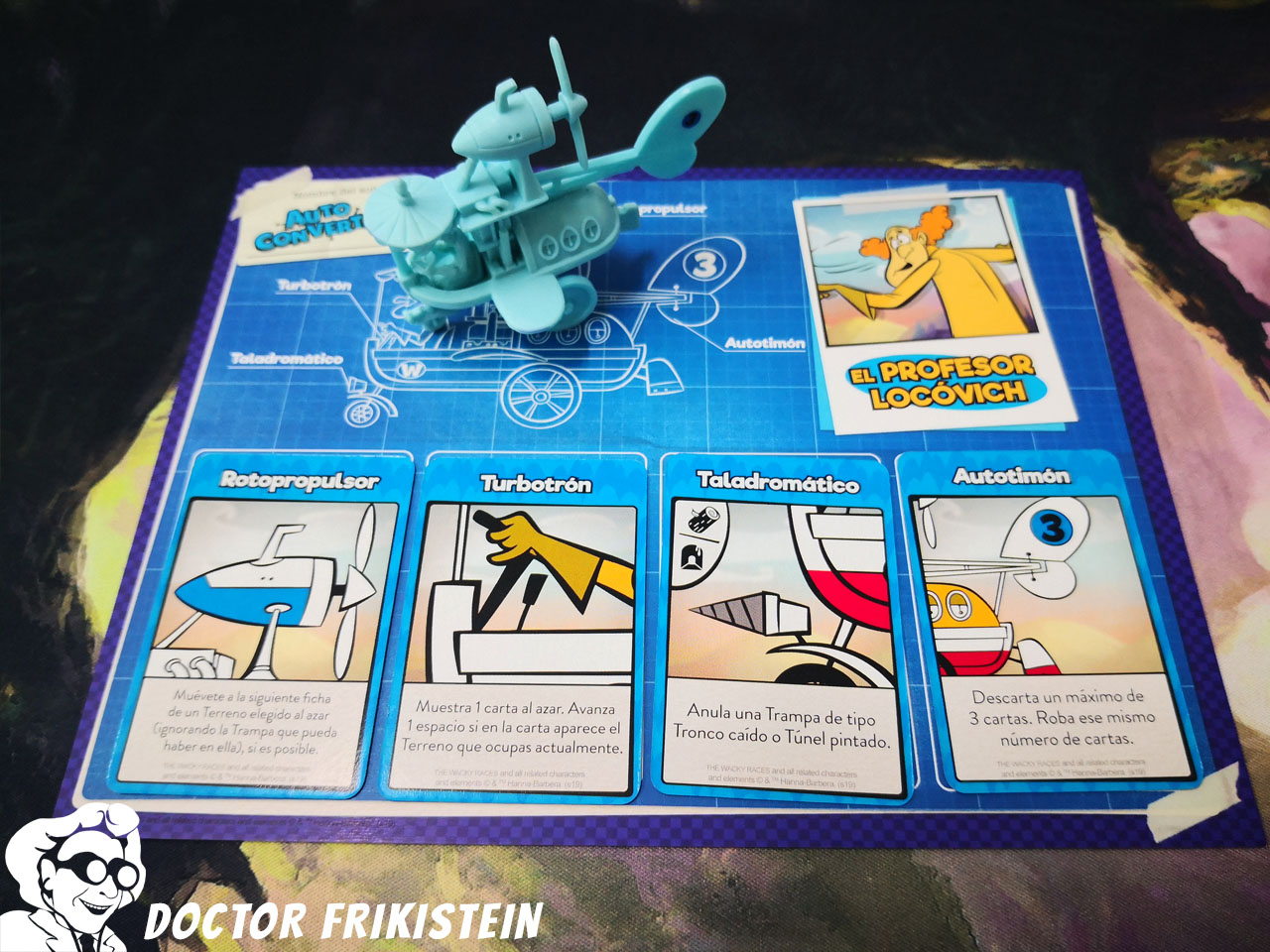 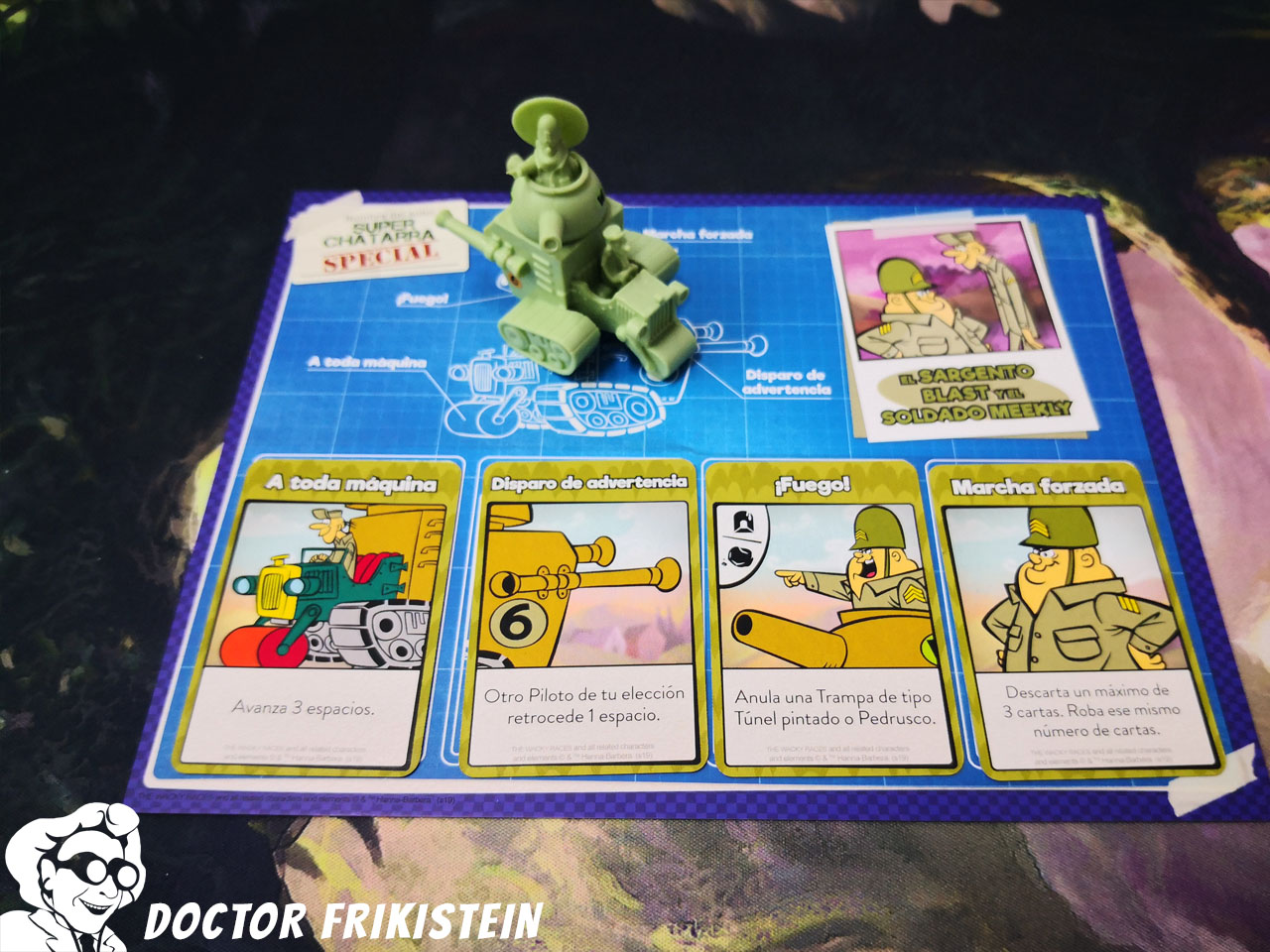 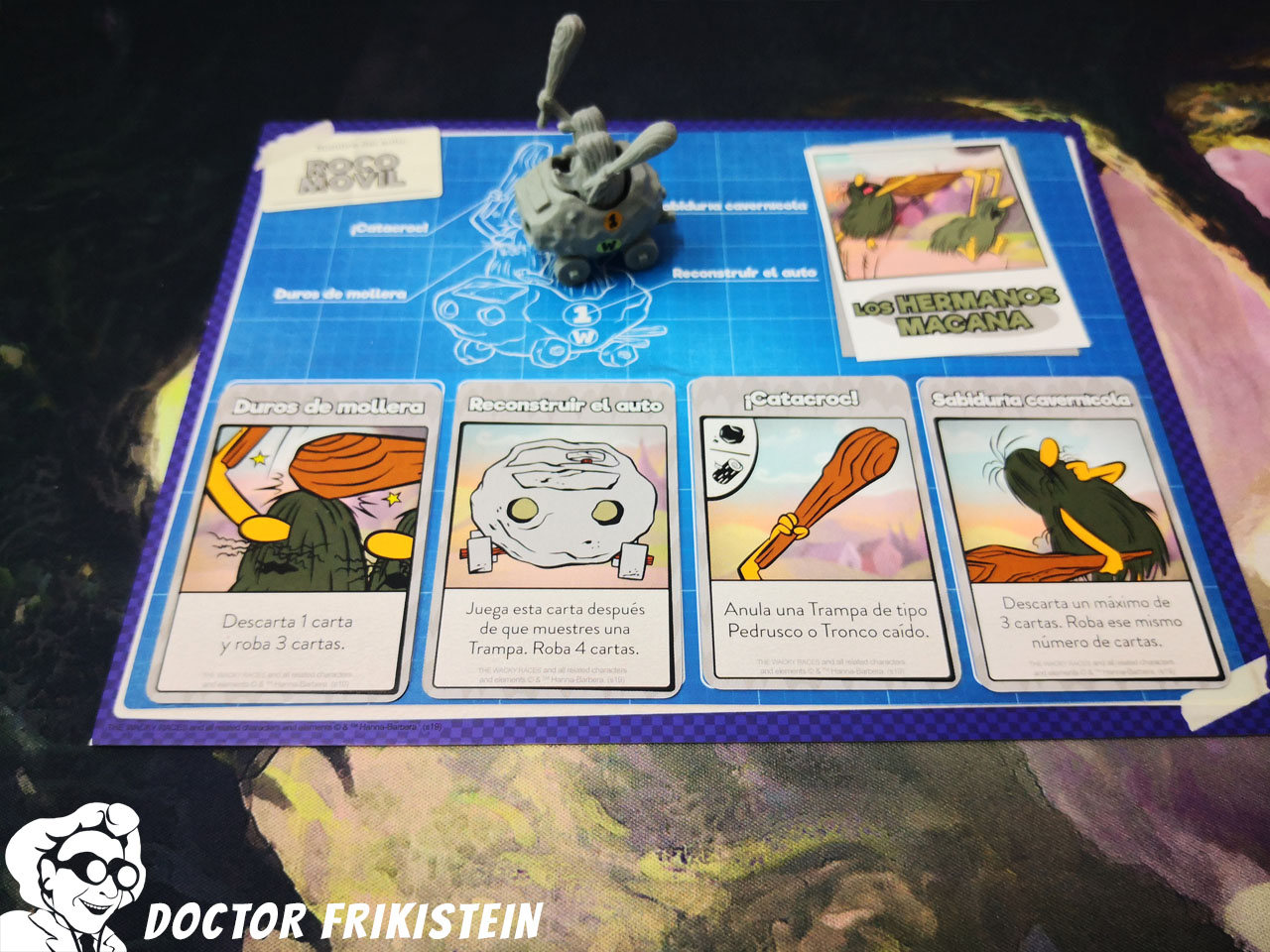 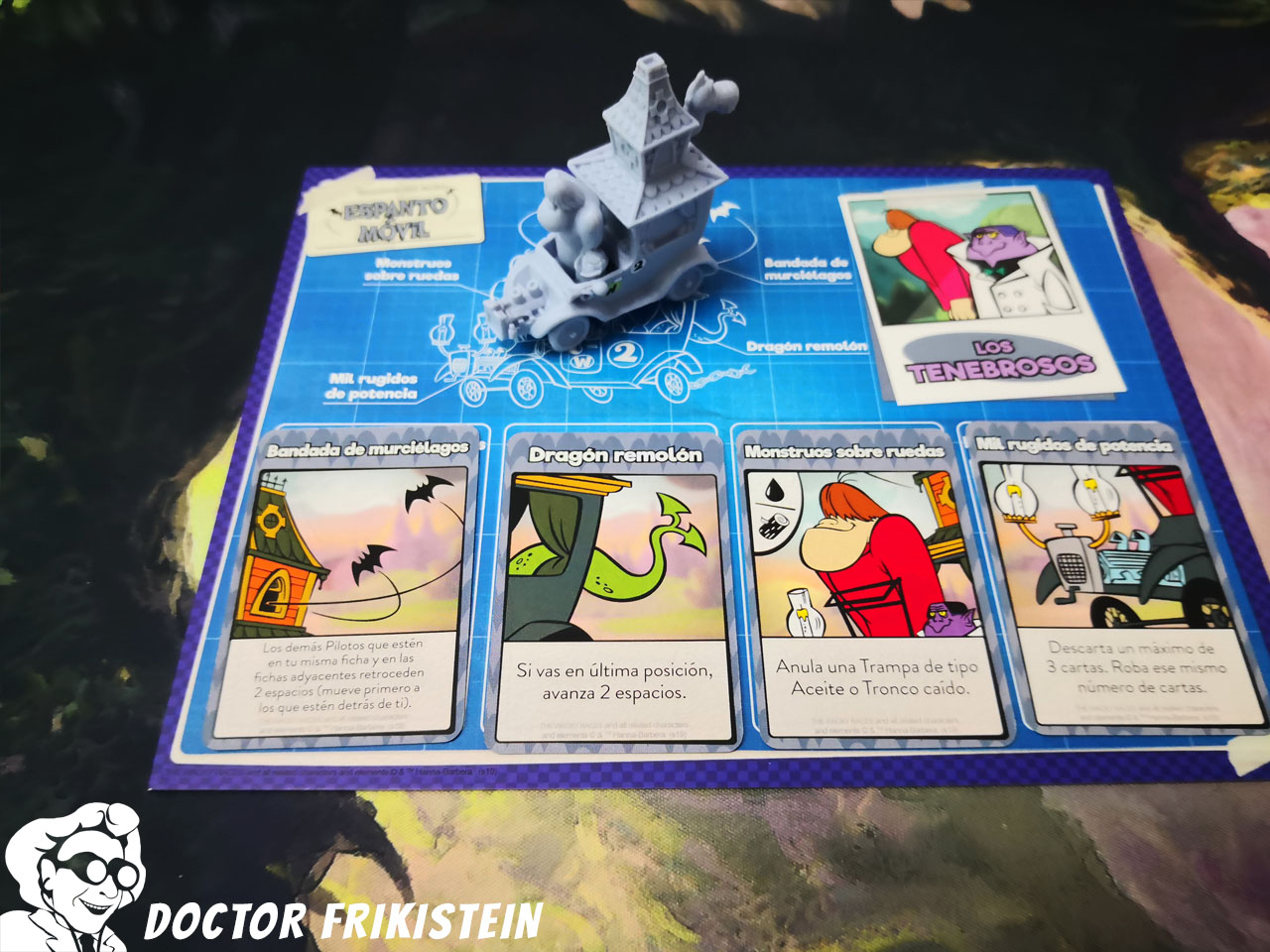 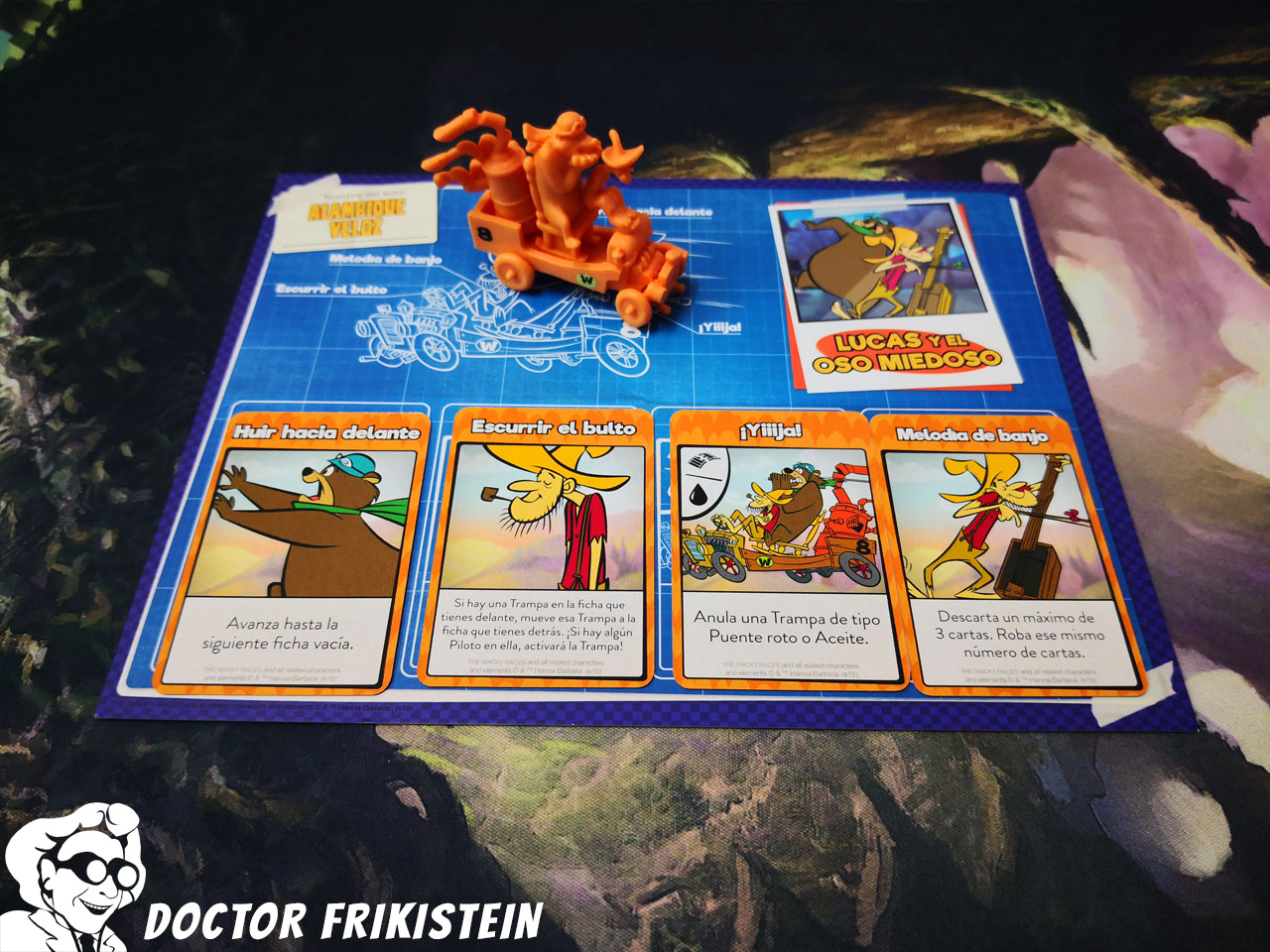 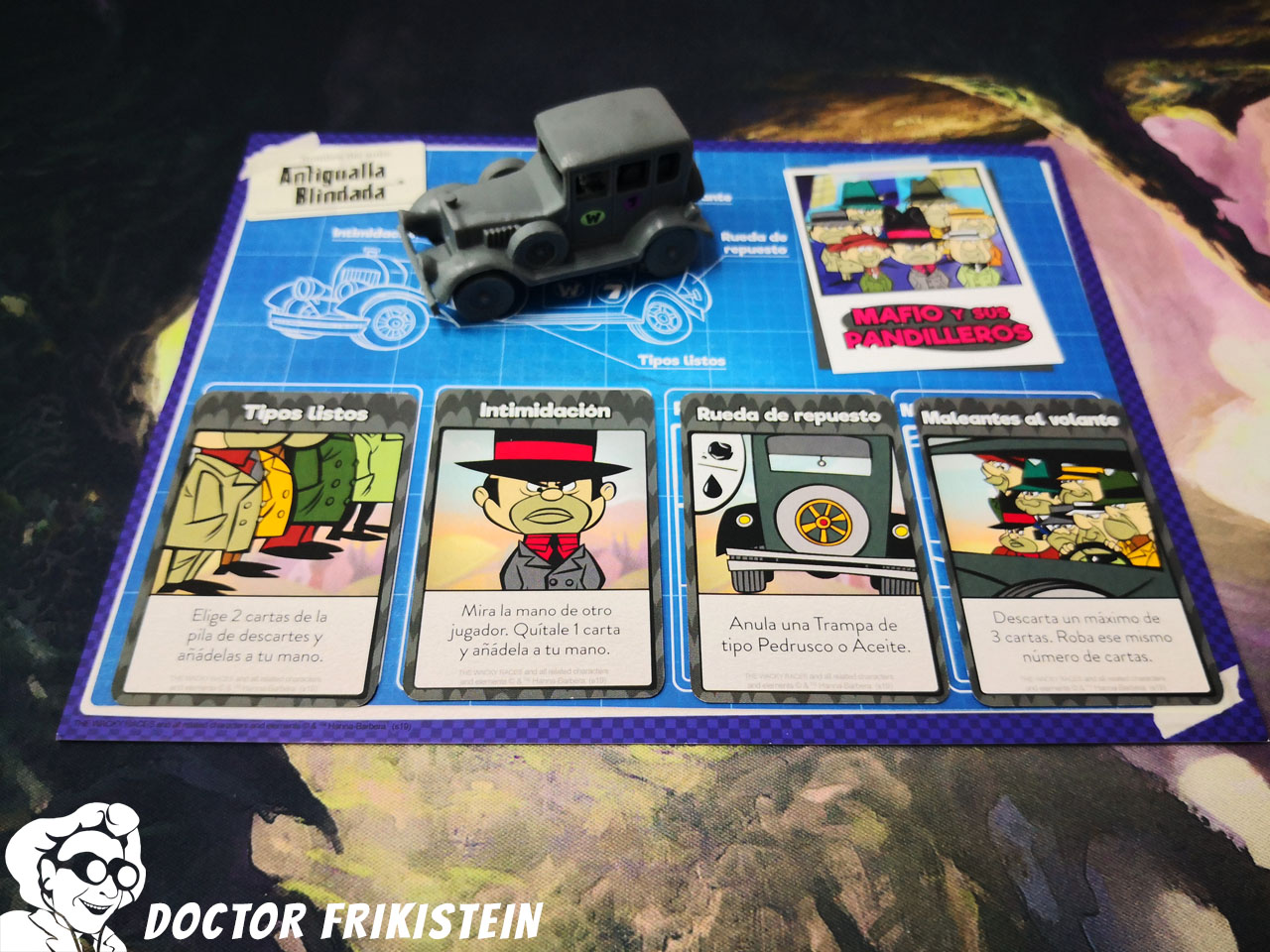 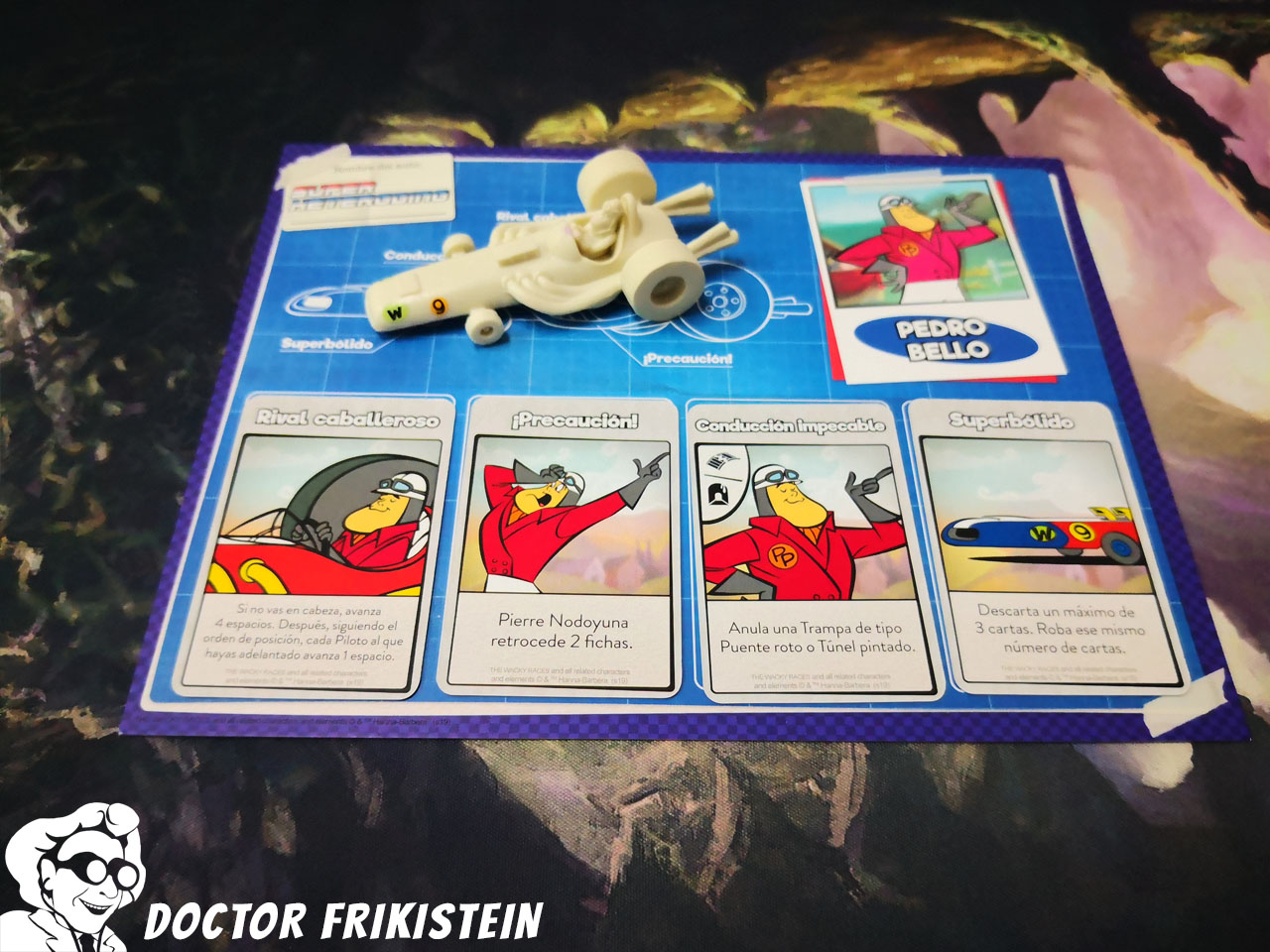 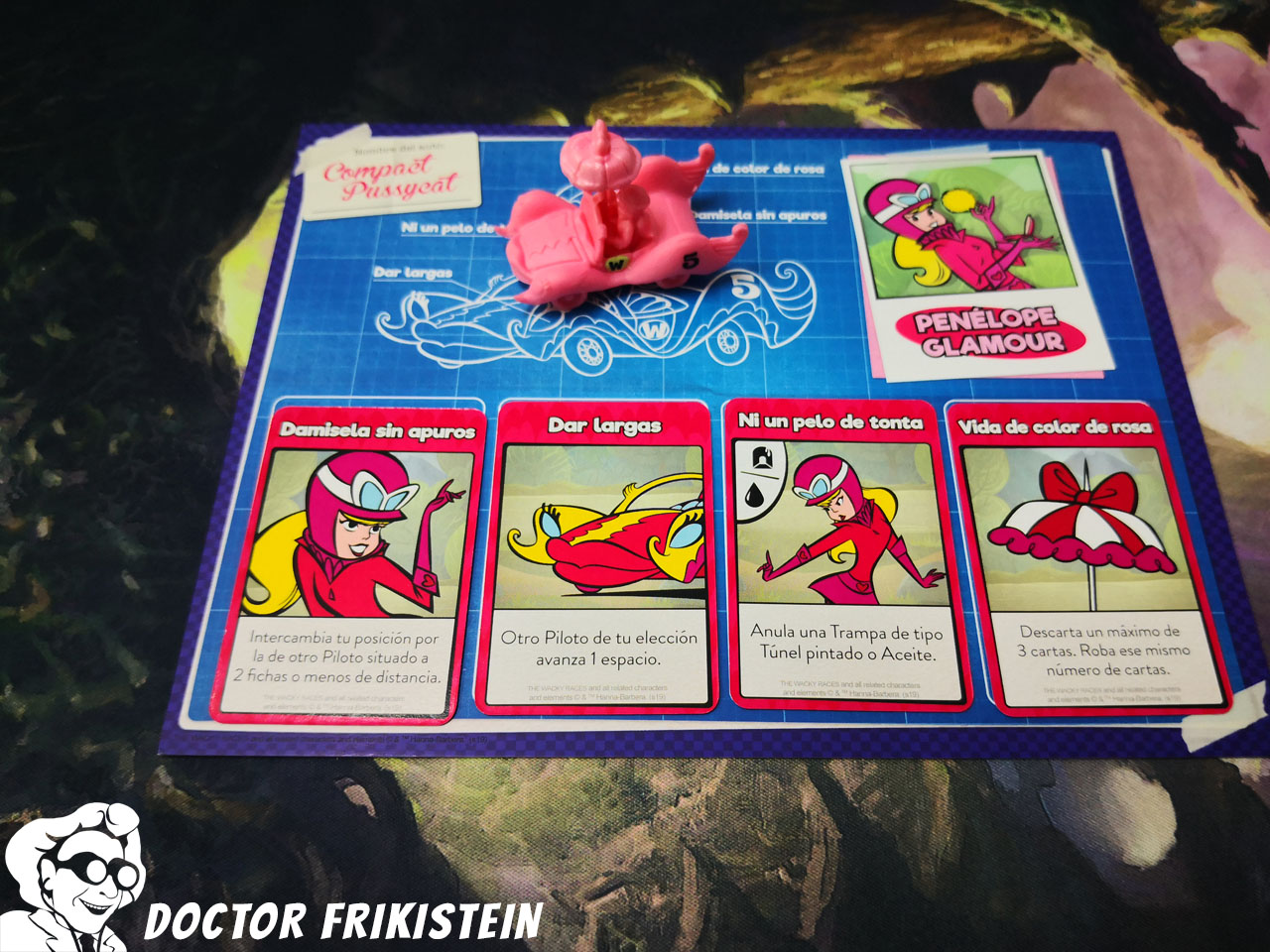 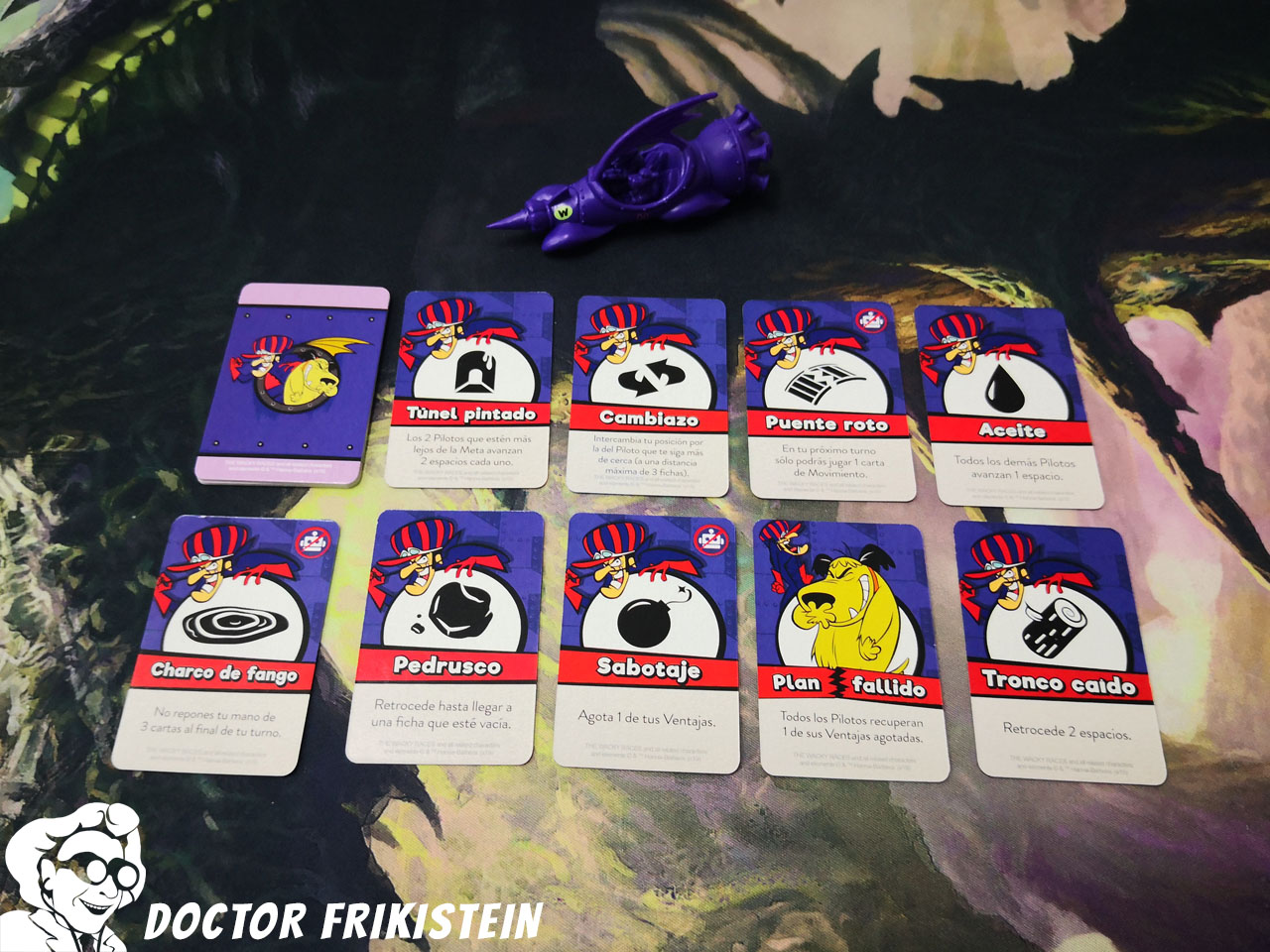 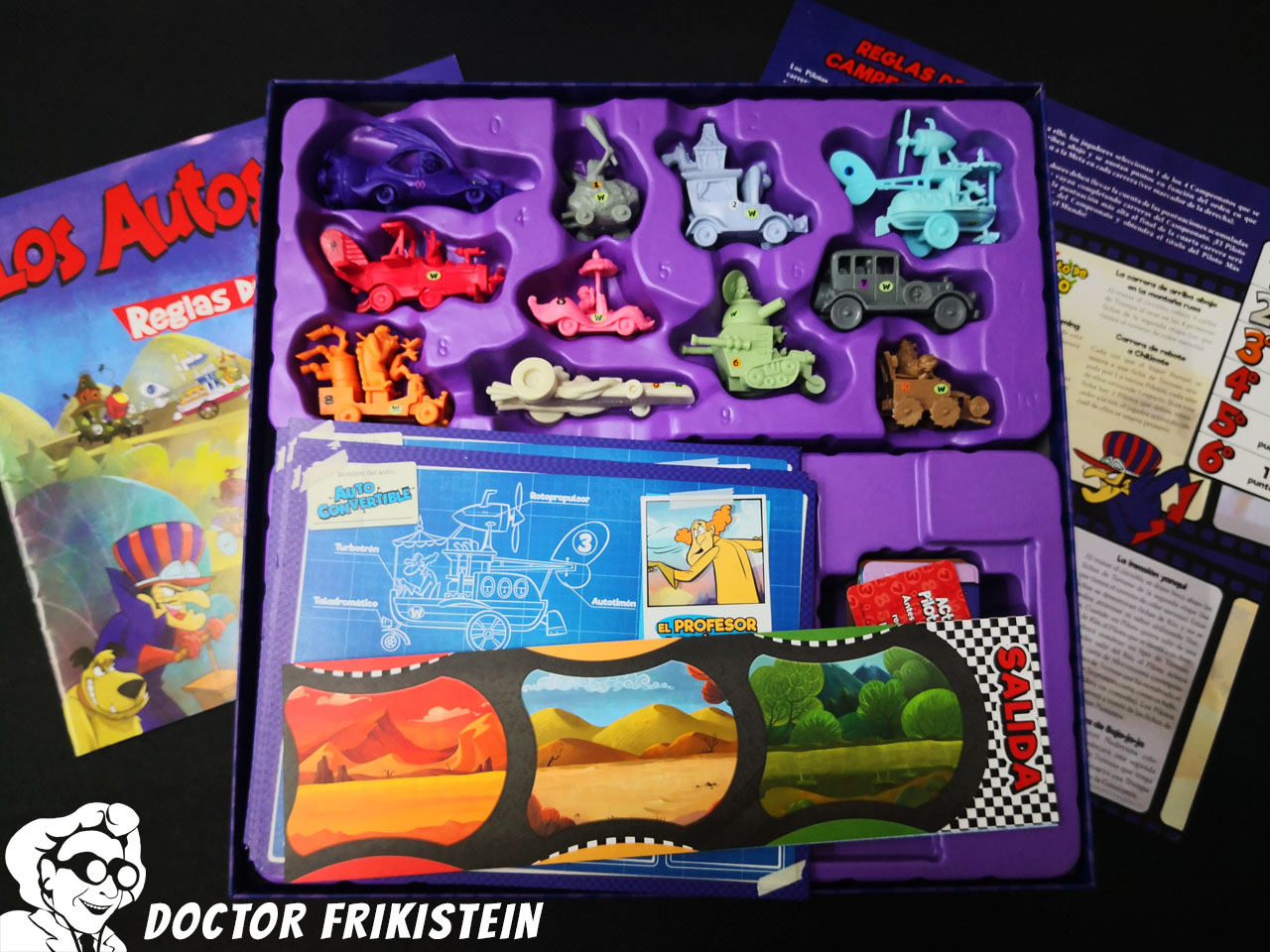 In spite of all the attention the game draws, Wacky Races is a simple filler. It is fine to occasionally take it out to the table to play it with the target audience: families. Personally I do not dislike it, I do not mind that it has low interaction between players and is dependent of movement cards you draw each turn. It is one of those games that for new people who want play modern board games because it is simple to play and easy to learn. However veteran ones will surely find it quite light. It would not be a game that I would buy as first option for my personal playroom.
In short, it is an entertaining game where you don’t interact much with other players. Recommendable? Yes for a family audience and for who do not have many expectations for the simple fact of being a game based on Wacky Races. Nothing recommended for those who want something more extreme backstabbing against other players.