In this article you will find the Review of Monolith Arena board game, where we reveal the tactical differences of the four factions that fight in this fantastic battle, and also the images of all their units and abilities.

Monolith Arena is (usually) a 1vs1 battle game where each player will control one of the four factions, each with its own combat style.

Hit you to the enemy banner until you reduce its hit points to zero. The winner in this case would be the one who still remains with his banner standing. Another way to end the game for a player is to steal the last tile of his reserve, which would trigger what is called the final combat. After this final combat if no player has managed to destroy the opponent’s banner, the one whose banner has the most life points will win.

The banners have 20 hit points, regardless of the faction they belong to.

During the preparation of the game each player chooses one of the four factions, makes a pile face down with all the tiles of the chosen faction and places his banner on any space of the board.

Once each player has made his first turn, the initial player play again. From now on the turns always work as follows: the player who has the turn must draw until three tiles. This means that if, for example, in a previous turn he decided to save two tiles in the current one he will only draw one of his pile. After drawing until three tiles you must discard one of them; With the other two you have the option to play, save or discard if you wish.

Saving a tile means keeping it face up in front of you to play it or discard it in a later turn, but it will imply that in your next turn you draw less tiles from your pile. To discard a tile is to put it in an own discard pile.

Playing the tiles is the most relevant action. There are several types:

Champions tiles, in addition of melee or ranged attack icons on one or more of their sides, may have other icons. These icons can represent abilities, such as teleportation, the net or the poison for the Champions of Lords of the Abyss. Others are simply attributes that the Champion possesses, such the Armor (protects from ranged attacks) or Tenacity (the unit has more hit points).

To explain a little of the the combat system, mention that it occur when a player uses a combat Order, causing the end of his turn immediately, or when the board has been completely filled and there is no free space left. The fight is resolved by phases of initiative. All Champions, including the banner, have a number in their tile. This number indicates the initiative. They would start attacking the Champions who have initiative number three, simultaneously. This means that if two units with the same initiative hit each other they will both die, unless skills such as tenacity or Runes of Protection avoid the death of any of them. Then they would go on to attack the units with initiative number two that remain alive, which would attack all simultaneously. We would follow this procedure until the units with zero initiative have been attacked. As a general rule, all Champions have a single hit point, so they die easly only receiving a single attack.

An arena in which every one enters to fight the others? Yes please! Monolith Arena is a very original and entertaining title to play. As other games that belong to the Wargame genre, the battlefield is represented using hexagonal tiles. A title that may resemble a lot and that I have a mínimum of knowledge is  Land of Rivals, where combat units and board are also hexagonal. The factions are the classics seen in fantastic genre. May be Lords of the Abyss are a more original. The other factions are typical humans, elves and dwarves. Could be invented something new? I suppose so, but I imagine that what attracts attention is to use something known and give few changes the typcal races used on fantasy movies and novels. However, I have the feeling that Monolith Arena is a minimal different game within the large game catalog that we have today. May be i could compare it to Neuroshima Hex! I have never played it, but I think they could have similar mechanics. Monolith Arena seems original to me but I do not give high freakism score by ths reason.

I played Monolith Arena two times before writing this review. The first time I felt a sense of sacrifice. You know that to attack the enemy banner you have to place the units that attack melee adjacent to it, so it is highly likely go to the cemetery as quickly as the units enter in the arena. A feeling of pure chaos! sending champions to die for sure. If you are one of those players who love to win the game losing few troops as possible, forget that in this game because it is really impossible. What enters into the battlefield will die shortly.

After being accustomed to that sense of collective suicide of troops, the second game I started to realize that the most important is the Champions initiative. In fact being the first to attack is essential, so to beat the enemy’s banner, the ideal is to use Champions attacks with a high initiative value.. Unfortunately I lost this game because I was suprised by Lords of the Abyss poison and net abilities.

I think you are going to want to play several games because each faction is different. . They have unic tiles and only few are coincident.

Monolith Arena has no complicated rules. The basis are easyly learned: draw until three tiles, discard one of them and play the rest, discard or save them. What represents a minimum of complication and causes to read the manual often is Champion’s icons: poison, armor, tenacity, maneuver, range attack, melee attack, teleportation, net … and the different orders and runes. It is not difficult to learn to play, but you have to have some patience until you learn all icons and powers. The average duration of a game is, in theory, 30 minutes according to the box; The two games I played lasted about an hour because I used a lot of time learning how Harbingers of the Forest and Guardians of the Realm worked. The rulebook is really well written and it is full of illustrated examples. It’s easy to read.

All the material in this game is correct for me. The art of the units, the rulebook, the boc … everything in general has good details and produced using quailty materials. The information that is received through the different Champion’s icons tiles is well shown and perfectly understood once you learn what each one does. Initiative tokens are very useful (for example when you use Acceleration Rune). Also they help to track champions initiatives when they change. Honestly, I have nothing bad to emphasize from the material. I think it’s a very good edition that doesn’t have any overproduced material. The game has exactly the all components it needs.

Here are all the tiles you can find in Monolith Arena on our Board game play mat. 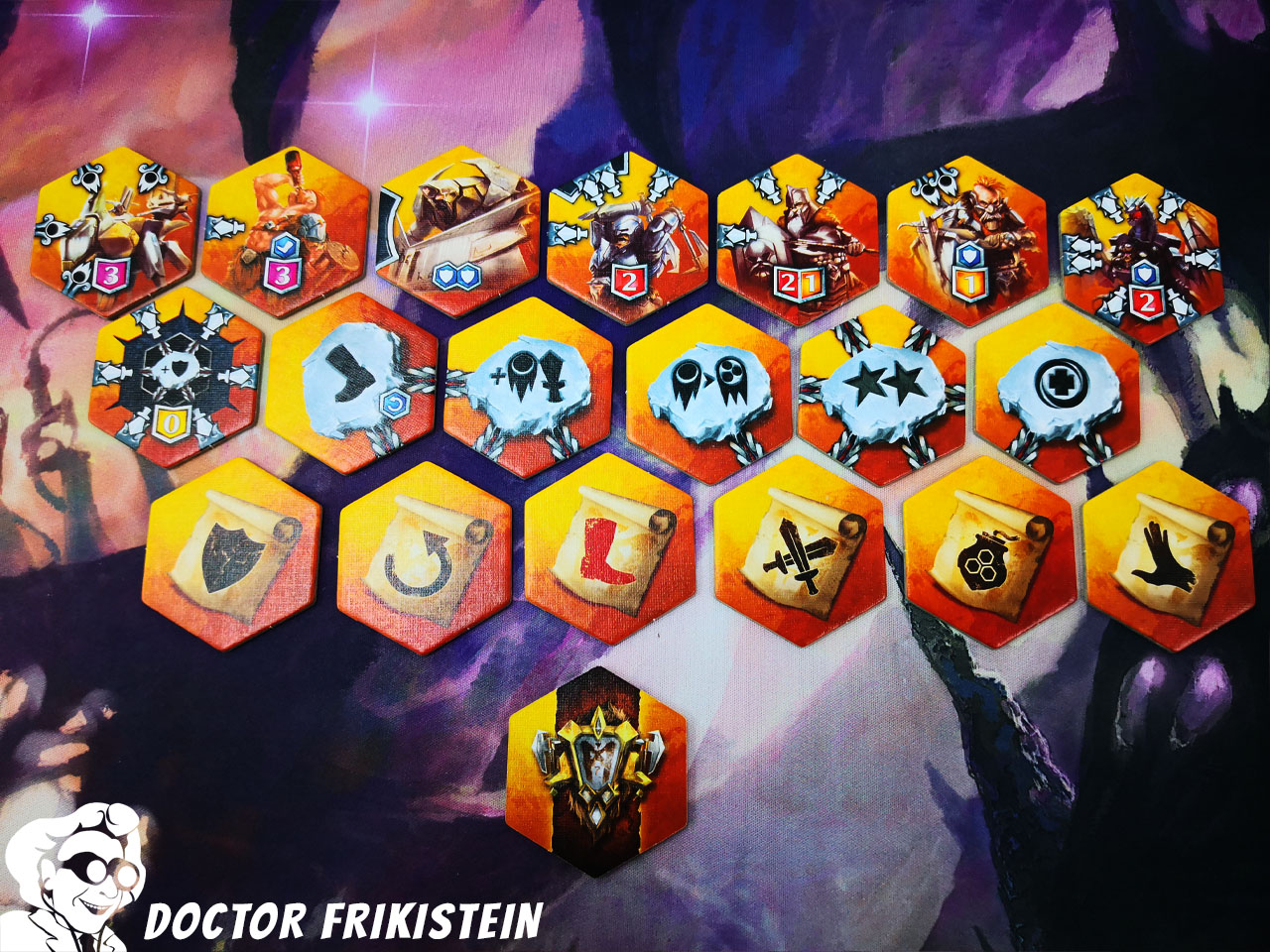 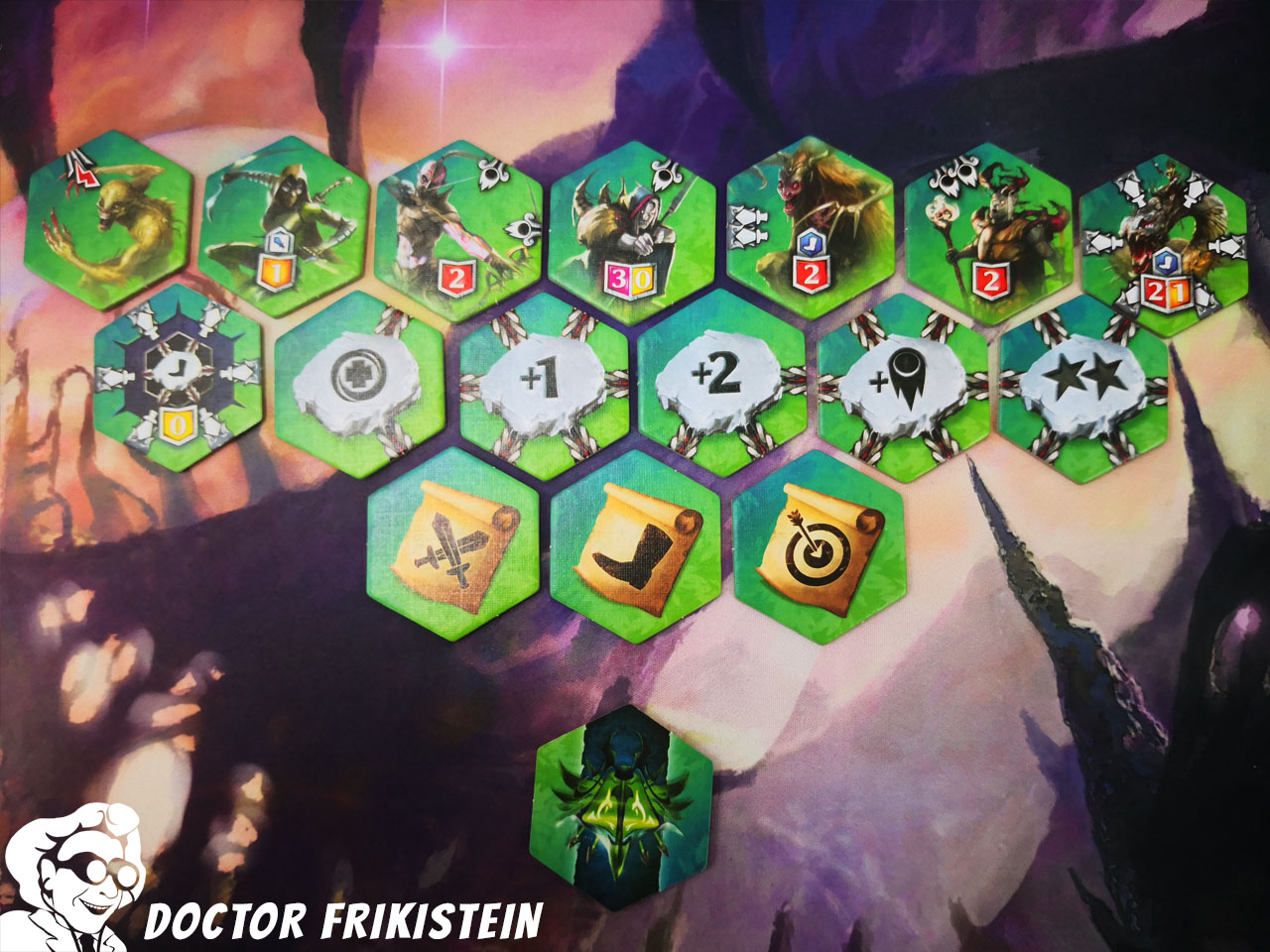 Monolith Arena is a game that I would buy for my personal playroom. First, because it is top for tow players. And second, because I don’t have anything similar, and since I look for different things that impress me a minimum, this game is on my wish list. Simple to learn and master thanks to its well-written rulebook. It is a fast and light estrategy game.

Although it is true that at the beginning of this review I wroted that it is a 1vs1, the game gives the option to play 2vs1 and 2vs2. I will not write about these modes because I have not been able to test them. I mention them so that you know that it is possible to play more than two players.

The title also has an additional game mode that uses monoliths. Basically they are used to add a surprise factor to the game. The monolith of each player hides from the beginning of the game two tiles that can be deployed within the turn of the active player to surprise the foe. The usefulness of the monoliths is to plan a strategy during the preparation of the game and place in it the favorite tiles to have them available from the beginning, without having to wait for them to appear at random when robbing turn after turn of the pile of tiles. However, this monoliths I think they should have more relevance, because the game is call game Monolith Arena and I think they no play an important role. In addition to be easy to learn and play, other strong point of Monolith Arena is the game needs litte space to play. The board is small compared with other games like Game of Thrones, Senji, Arkham Horror … and the preperation is fast: in less than five minutes everything is ready to start to play.

I definitely liked Monolith Arena and I hope to have it on my shelves shortly. As I always say, with games it is not enough to try them only once, sometimes you have to give them a second chance.